Incessant rain in Raipur has forced BCCI to shift the India vs Bangladesh Under-23 one-day series to Ekana International Cricket Stadium in Lucknow, an official release stated.

“The upcoming five-match one-day series between India U-23 and Bangladesh U-23 will now be played at Ekana International Cricket Stadium in Lucknow. The series was originally scheduled to take place in Raipur, but incessant rain has led to a change in the venue,” as per the BCCI release.

The five-match series starts September 19 and all the matches will be played in Lucknow. The U-23 Indian team is led by Uttar Pradesh’s Priyam Garg, who was part of recently concluded Duleep Trophy 2019-20.

Garg was in the news recently, after suffering a blow to the back of the neck during the tournament. Playing for India Green against India Red, Garg, fielding at silly point, was in the line of the ball even after trying to get away from a back foot punch by Avesh Khan. Luckily, his helmet had a neck guard, which softened the impact. 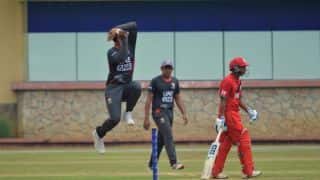