Shaw was sent to a Sydney hospital for scans, the results of which have revealed a lateral ligament injury, the BCCI announced.

Teenaged opener Prithvi Shaw will play no part in the first Test between India and Australia next week after suffering a nasty injury on Friday.

Shaw, 19, injured himself while attempting a catch at the deep midwicket boundary during day three of India’s four-day practice match with the Cricket Australia XI at the Sydney Cricket Ground on Friday and was carried off the field by team physiotherapist Patrick Farhart and a member of the support staff while visibly in pain. The Indian team management sent him to a Sydney hospital for scans, the results of which have revealed a lateral ligament injury, the BCCI announced today.

Shaw returned from hospital with a strapped left ankle and with the assistance of crutches, which sent an ominous message to onlookers. A couple hours later, it was revealed that Shaw had sustained a ligament injury.

“He will undergo an intensive rehabilitation program to hasten the recovery and be available for selection at the earliest,” said a BCCI media release.

The freak incident came when Shaw completed the catch of fellow teenage batting sensation Max Bryant just inside the deep midwicket boundary, but on impact of hitting the ground landed awkwardly and fell over the boundary line for it to be called six. The medical teams of both the Indian and CA XI setups ran to check on Shaw, and he waas then carried off the field and taken on a golf cart to a waiting vehicle that hurried him to a local hospital.

Shaw, who turned 19 this month, hit 11 fours during his 69-ball 66 on day one at the SCG to further underline the belief that he has what it takes to succeed in Australia. Shaw made his Test debut against West Indies last month and walked away with the Man-of-the-series award with scores of 134, 70 and 33* across two Tests, and recently scored 62 and 50 in India A s drawn four-day match with New Zealand A before hoping over to Sydney to link up with the senior team.

He appeared set to open the innings for India at Adelaide Oval on December 6 but this injury setback has come as a massive setback. India have Murali Vijay as the third opener, and the veteran is part of India’s 14 for the tour game.

A replacement has not been named by the BCCI yet. 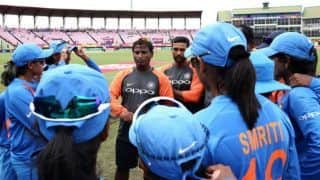