There was also a maiden Test call-up for Essex seamer Jamie Porter, who is the leading wicket-taker of the County Championship season.

Moeen Ali and Adil Rashid have been recalled to England s Test squad for next week s series opener against India at Birmingham, forming a likely spin-bowling pairing on what is expected to be a dry Edgbaston surface.

Rashid has returned at the expense of the offspinner Dom Bess, who played in the drawn two-Test series versus Pakistan in May-June but made more of an impact as a batsman with scores of 57 and 49; he went wicketless and Lord s and claimed three tail wickets in Leeds. Bess had earlier this year replaced his Somerset team-mate Jack Leach, who made his Test debut in New Zealand in March but was set back by a broken left thumb on his bowling hand.

Ed Smith, the national selector, today unveiled a 13-member squad for England s 1,000th men s Test match starting August 1 and it included good news for the home team, ranked fifth in Tests, with the record-setting pair of James Anderson and Stuart Broad to be reunited. There was also a maiden Test call-up for Essex seamer Jamie Porter, who was the leading wicket-taker of the 2017 County Championship season.

Anderson, who needs 23 wickets to surpass Glenn McGrath and become the most successful fast bowler in Tests, has recovered from the right shoulder injury that sidelined him for six weeks, while Broad, who has taken 417 Test wickets, has been passed fit after a worrisome ankle injury this summer. They will be backed the Ben Stokes, Sam Curran, the Surrey left-arm seamer who debuted against Pakistan in June, and Porter with the injured Mark Wood out for a fortnight.

The focus, however, will be on whether England play two spinners at Edgbaston.

Rashid, who last year made himself unavailable from four-day cricket with Yorkshire, has been the focus of much discussion concerning his skills as a legspinner. He has enjoyed a successful English summer with 20 wickets at an average of 23.95 in England s ODI series wins over Australia and India, and most recently Virat Kohli struggled to pick him. There is also the fact that Rashid took 23 wickets during the series loss in India in 2016-17, which was 13 more than any of his England team-mates managed.

Clearly, the one-off circumstances around Adil s return to the Test squad are unusual. However, the selection panel was unanimous in believing that Adil should be selected in England s squad, said Smith when naming the squad. Before the selection meeting, Adil had confirmed his availability to play Test cricket for England for whole of this summer and the upcoming winter tours to Sri Lanka and West Indies.

Moeen, who in 2014 stunned India with 19 wickets at 23 runs apiece in England s 2-1 Test series win, has not played five-day cricket since he was omitted from the squad that turned New Zealand after the Ashes defeat. In his most recent county match, the allrounder claimed eight wickets with his offspin, including a first five-wicket haul since the summer of 2017 when he tasted huge success against South Africa with 25 wickets at 15.64 in a series-winning performance.

Moeen Ali has taken his strong bowling form from England s ODI team into the county championship, where he picked up eight wickets in a fine display against Somerset this week. Moeen is recalled to the XIII having missed out on selection against Pakistan, said Smith.

Porter, 25, has impressed for Essex and England Lions over the past few seasons, and in 2017 was County Championship Player of the Year as his club won the title for the first time since 1992. He has replaced Chris Woakes, whom the ECB said needs more time to recover from recent thigh and knee injuries.

England s batting for the Birmingham Test comprises the opening pair of Alastair Cook and Keaton Jennings, followed by Joe Root, Dawid Malan, Jonny Bairstow, Jos Buttler, Stokes and Ali. Stokes will not feature in the second Test against India at Lord s from August 5 as his court case in Bristol begins a day later. 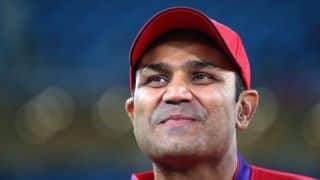 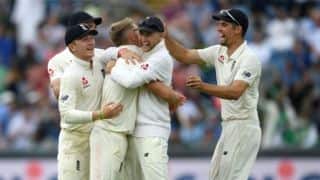