India struck post lunch with the wicket of Sam Robson on Day Three of the first Test against England on Friday. Robson and Gary Ballance shared a solid partnership of 125 runs before Ishant Sharma removed Robson for 59. England are on 141 for two.

India had struggled to pick any wickets in the first session. Ishant got one to seam back in to Robson who missed it and the ball hit him on the back pad. Umpire Bruce Oxenford raised his finger. Hotspot replays showed that there was a mark on the bat but it came off the bat brushing the pads.

The second wicket partnership was of 125 runs and shepherded England to stability. Ian Bell is the new batsman in. Jadeja was the only bowler who looked wicket-taking in the first session. Robson was dropped earlier by Virat Kohli off Jadeja’s bowling. 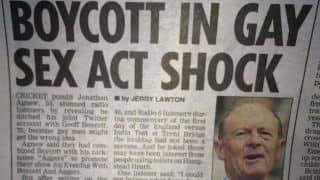