England are at 131 for one at lunch on Day Three trailing India by 326 runs.

With the cloud cover refusing even a tiny patch of blue make its way through, MS Dhoni walked in with his orange tinged sunglasses perched behind his head. As a captain, it is perhaps an asset to have eyes at the back of the head. From the committee room balcony, former British Prime Minister John Major looked on.

The first two balls from Mohammed Shami were slanted across Sam Robson. Dhoni moved Virat Kohli across from one of the four slips to his left on the leg side. For the left-handed Gary Ballance the number of slips were back to four and waited eagerly for the edge. Indians were on the attack.

However, if one expected helpful conditions the hopes were dashed soon enough. When the fifth ball from Bhuvneshwar Kumar’s first over pitched short of good length, Ballance had nearly an eternity to go back and pat it down back the wicket. And the first ball of the following over from Shami reached Dhoni on the second bounce. No new devil had appeared overnight out of the pitch or in the air. All the cloud cover had done so far was to offer some relief from the sun to the spectators in uncovered stands.

The only excitement in the first few overs occurred when umpire Bruce Oxenford raised his arms in a peculiar six like signal towards the western stands and a member of the ground staff appeared, bearing a huge, rather unsubtle instrument resembling Thor’s Hammer, and worked vigorously to flatten some small unevenness in the bowling crease. He departed to a warm round of applause.

Under the Radcliffe Road scoreboard, a couple of fans stood dressed up as nuns and, not quite in keeping with their choice of fancy dress, gulped beer from voluminous glasses at twenty past eleven in the morning. In the meantime, Ballance inside edged a ball from Bhuvneshwar to long leg to get his first run of the day after 20 minutes. The England total trickled past 50.

Shami pitched it up, and Robson leaned forward to drive one through the covers for four with minimum back-lift and maximum middle. The next ball was also over-pitched, moving across into the batsman and was flicked away for four.

Even with Ballance practically stroke-less, the batsmen looked comfortable and the England dressing room relaxed. Stuart Broad was seen absorbed in the superb Duncan Hamilton penned biography of Harold Larwood, perhaps the most famous son of the Notts county. To allow a peaceful read, Robson forced Shami past mid-wicket for four. The number of slips was now down to three, a short mid-wicket positioned instead.

Robson tended to stand a wee bit outside the crease, more to negate the slowness of the pitch than to counter any hint of swing. Dhoni signalled to the dressing room. Out came a helmet, and the Indian captain went forward to stand up to the stumps. Two slips stood in wait, a short cover and a short mid-wicket.

Ten overs were bowled, Robson had scored 21 in the morning, Ballance just three. Ishant Sharma replaced Shami from the Pavilion end. Ballance edged one along the ground to third slip and fished at two more. It was the angle rather than swing.

As in the Indian innings, the sluggish pitch necessitated unusual fields. After about 50 minutes of stalemate, Bhuvneshwar bowled with one slip while two men hovered in front of the bat at straightish short cover and short mid-wicket. With 31 overs gone by there was a faint hint of reverse swing.

In the pre-match press conference, Dhoni had stated that Ishant could get additional bounce. On the brink of the drinks break he made one kick up against the run of play and Robson played it awkwardly, in a tangle, gloving it down. The 15 overs of the first hour had brought 34 runs, just eight of them off Ballance’s bat.

The hint of tentativeness of the morning gave way to composure in the second hour.

If India knew they would win the toss and score 450 runs on a slow track, they would have picked Ravichandran Ashwin. But, in the first Test of a long series in England, it is difficult to decide which team to go with

Ravindra Jadeja was introduced immediately after the break, and managed to turn one in from the rough rapping Ballance on the front pad. He wheeled away with his short, economical run up, a slip, silly point and short leg for Ballance, slip and two short legs for Robson. The occasional runs that trickled off his bowling were scored in nudges and deflections, occupation taking precedence over accumulation. One off Robson’s bat did not quite carry to Kohli at backward short-leg. By lunch his figures read 10-3-15-0, his morning session registering 8-2-12-0. This is one department in which India has been distinctly ahead of England.

The action was however taking place at the other end.

The monotony was broken when Ishant drifted on to the pads of Ballance and was flicked past mid-wicket for four. Ballance had struck the last boundary 78 balls earlier. As so often happens, it was followed by two more, a fierce cut and another flick. Dhoni moved the third slip to short mid-wicket. After a fairly good morning spell, Ishant had lost his length. But, it must be said that he looked the most threatening of the Indian medium pacers in the morning session.

He was taken off and Stuart Binny was introduced. Ballance drove the rookie seamer handsomely through cover to bring up the hundred of the innings. In the next over the southpaw cut him delicately to the third-man boundary to beat Robson to the fifty mark. He repeated the stroke again after three balls, the ball reaching the fence at a faster clip this time around. After the glacial morning, the batsman had now hit six boundaries in the course of 17 deliveries.

Binny’s innocuous offering was next steered by Robson to the third-man boundary to bring up his half century. When Shami was brought back for one over before lunch, he dispatched him to mid-wicket for four. The score at the break stood at an ominous 131 for one.

By now, the game seems poised to go down as one of the old fashioned stalemates, with high scores and low interest levels. Ballance, blessed with a last name converted into a nightmare by autocorrect, is showing all the signs of becoming a thorn in the Indian flesh. Robson demonstrates no inclination of departing anytime soon.

Binny has gone for 21 off his five overs. In retrospect, on this wicket, Ravichandran Ashwin could have been a handy arrow in the quiver, but as Rahul Dravid put it in the morning, “In hindsight it is a wonderful idea. If India knew they would win the toss and score 450 runs on a slow track, they would have picked Ashwin. But, in the first Test of a long series in England, it is difficult to decide which team to go with.”

The first few minutes after lunch have been pivotal in the last two days. It remains to be seen whether there will be some miracle during the same period on Day Three to restore some balance between bat and ball. 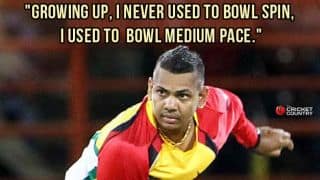