Cook said that England should not be too "nicey-nicey" but there is a muddied line.

Alastair Cook said there was no need for England to adopt a “nicey-nicey” approach after the International Cricket Council (ICC) confirmed they would not appeal against the decision to clear James Anderson over claims he pushed and abused India’s Ravindra Jadeja. Judicial commissioner Gordon Lewis last week cleared England paceman Anderson of breaching the ICC’s code of conduct after he clashed with Jadeja during the drawn first Test at Trent Bridge.

Following a complaint from the Board of Control for Cricket in India (BCCI), the ICC said on Tuesday that it would review Lewis’s decision, but it has decided to accept his findings. However, what is not in dispute is Anderson’s fondness for ‘sledging’ — verbally abusing opposition batsmen

England great Geoffrey Boycott, while hailing Anderson as the country’s best bowler since Ian Botham, urged the Lancashire seamer to modify his approach. “Jimmy should reflect on whether he wants to be remembered as one of the all-time great English seam bowlers or a foul-mouthed abusive bowler,” said Boycott in his Daily Telegraph column published on Wednesday.

“To me it is a no-brainer. James Anderson should zip it up and bowl.” And in confirming the ICC would take no further action against Anderson, chief executive, David Richardson, a former South Africa wicketkeeper, said: “We must reiterate that there is no place in the game for the use of offensive language that is personally insulting of one player by another.”

However, Cook, speaking later on Wednesday, insisted he had no qualms regarding the behaviour of the 32-year-old Anderson, now just 12 wickets off equaling Botham’s England record of 383 Test wickets. “We know every time that you put on the shirt as an England player or any international you’re a role model for young kids,” Cook said.

“We also want to play competitive cricket, we don’t want it to be too nicey-nicey. There’s always that muddied line. There’s little bits where he (Anderson) might have overstepped the mark occasionally throughout his career, but you’d rather him be on the line than too passive,” said Cook.

Anderson and Jadeja were seen to exchange words on the second day of the first Test on July 10 as the players left the field at lunch and India alleged that this had escalated into a physical confrontation inside the pavilion.  But Lewis, a retired Australian judge, found Anderson not guilty of a Level Three offence of “abusing and pushing” Jadeja, who had a fine for a less serious Level One offence rescinded.

Anderson could have been banned for up to four Test matches if he had been found guilty. But the ICC’s decision not to appeal against Lewis’s findings means that he is now free to concentrate on the fourth Test at his home ground of Old Trafford in Manchester, which begins on Thursday, with the five-match series currently tied at 1-1.

Anderson’s return of seven for 77 saw him named man of the match in England’s 266-run victory in the third Test at Southampton, a result that ended a run of 10 successive Tests without a win for Cook’s side. “It’s great that this is now behind him,” Cook said. “He gets to play in a home Test match. I think that’s what the biggest concern was — that he wouldn’t get to play at Old Trafford..

India captain Mahendra Singh Dhoni added: “It is time for us to move ahead.” However, Anderson’s persistent ‘sledging’ had clearly annoyed Dhoni. “If someone is consistent with his abuse he should be punished, it doesn’t matter who he is. We have to monitor it constantly, but at the same time it’s important that we play strong cricket,” said Dhoni. 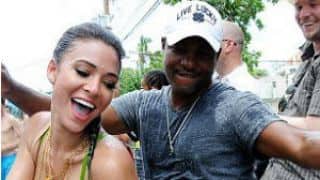