Jason Roy has been included in the squad.

Uncapped batsman Jason Roy was included in the 14-man England squad announced on Sunday for next weekend’s one-off Twenty20 international against India at Edgbaston. The 24-year-old Surrey rising star was selected after topping the run-charts in this season’s domestic T20 competition with 677 runs at an average of 48.35 and a strike rate of nearly 160.

South Africa-born Roy was joined in a squad for next Sunday’s match at Edgbaston by three other players not yet involved in the ongoing one-day series with India. All-rounder Ravi Bopara, surprisingly omitted from the ODI squad, was included on this occasion with Yorkshire seamer Tim Bresnan and Nottinghamshire batsman James Taylor also selected.

Middlesex batsman Eoin Morgan, the former Ireland international, will captain England in the absence of regular T20 skipper Stuart Broad who is about to undergo knee surgery. 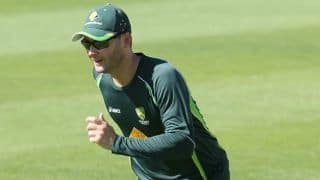