India vs England 2014 only T20I: stats highlights
By Press Trust of India

Statistical highlights of the one-off twenty20 international between India and England at Edgbaston.

# Moeen Ali has posted his second duck in T20Is — his first was against Sri Lanka at Chittagong on March 27, 2014.

# England have won five games and lost three out of eight T20Is played against India – success % 62.50.

# Mohammed Shami (3/38) has recorded his best bowling performance in T20Is.

# Morgan became the second captain to hit seven sixes in an innings in T20Is. Chris Gayle was the first skipper to record the feat, achieving the feat against India during his magnificent innings of 98 off 66 balls at Bridgetown on May 9, 2010.

# Morgan’s aforesaid knock is his first fifty in 14 T20Is in England.

# Morgan has received his second Man of the Match award vs India — his fourth in T20Is.

# Virat Kohli (66 off 41 balls) has established a record for most fifties (nine) for India in T20Is, ecipsing Yuvraj Singh’s tally of eight fifties.

# Kohli, with 184 runs at an average of 30.66 in six matches, including a fifty, is the leading run-getter in India-England T20Is.

# India have lost four matches in T20Is while chasing with MS Dhoni remaining unbeaten – the last occasion being — 22 vs New Zealand at Chennai on September 11, 2012.

# Ravichandran Ashwin had conceded 17 runs in his first over — the most runs scored off an Indian bowler in the first over of a T20. 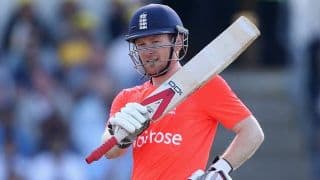 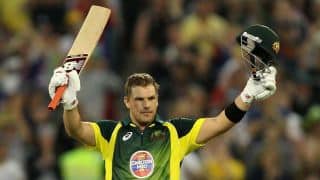 Aaron Finch: It's an honour to captain your country in any form