Kerrigan was surprisingly selected for the fifth Test against Australia and had a forgettable outing.

Amid criticism that his Test team recall may have come too soon, England spinner Simon Kerrigan has won the backing of his teammates who believe he will raise his game if given a second chance in the Lord’s Test against India starting on Thursday.

Kerrigan was surprisingly selected for the fifth Test against Australia at The Oval last year but failed to justify his inclusion as he conceded 53 runs from just eight overs.

The 25-year-old Lancashire spinner never recovered from a brutal early assault from Australian batsman Shane Watson as his first two overs went for 28 runs. England’s opener Sam Robson knows better than most that nerves can compromise a Test debut, and is confident Kerrigan will up his game if he is granted a second chance this week. Robson succumbed to the tension when he made one and 19 at the top of the order in his first two Test innings against Sri Lanka on his home patch at Lord’s last month.

He has since restated his case impressively as a long-term England opener with a maiden hundred at Headingley and then a half-century in the drawn first Investec Test against India at Trent Bridge. England sent for Kerrigan after that stalemate in the midlands, adding the slow left-armer to their squad for the second Test at Lord’s – despite his nightmare debut against Australia at The Oval last summer.

Former England captain Michael Vaughan had said Kerrigan is not ready to win his second cap and play in the Test against India at Lord’s. “I fear for Simon Kerrigan. England have thrown him back into international cricket far too soon,” Vaughan said. Former England spin bowler Phil Tufnell said: “It must be a horrible position for the lad now. I don’t know how that’s affecting him.” Robson, however, has seen enough of the Lancashire spinner – on England Lions’ tour of Sri Lanka last winter, then in the Nottingham nets last week – to be confident he would fare much better if selected again tomorrow.

It will not be a gamble, according to Robson, if Kerrigan is selected. “Depending on what happens, if he plays, I have got no doubt that he will do well.” England’s No 3 batsman Gary Ballance also endorsed Robson’s opinion of Kerrigan. “He bowled brilliantly in the nets [at Trent Bridge], and looked very confident and upbeat. I’m sure he’ll be up for it,” Ballance said. “From what I’ve seen he’s a quality bowler … and he’s going to come back better for that experience last year at The Oval. I have faith in him, and I’m sure everyone else does. I hope, if he does get a chance, everyone will get behind him and he’ll put in a good performance,” he added. 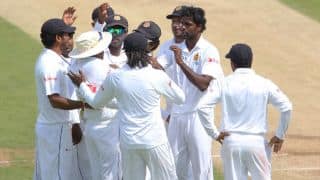