India won the toss and elected to bat first in the second Test at Visakhapatnam against England.

India, who won the toss and elected to bat first, started their innings with opening batsmen KL Rahul and Murali Vijay. Rahul replaced Gautam Gambhir and Virat Kohli had already declared the same in his press conference on Wednesday. Murali Vijay took the strike in the first over and got boundary off the second delivery providing steady start to India. However, Rahul was unable to build on the momentum and was dismissed for a duck on Stuart Broad’s delivery with a brilliant catch by Ben Stokes at the slip. Cheteshwar Pujara entered at No. to join Vijay. Both are racing towards their 3,000 Test runs with Pujara requiring three runs while Vijay achieving his milestone off 20 runs. LIVE Cricket Scorecard: India vs England 2nd Test at Vizag

India have handed out a Test debut for off-spinner Jayant Yadav in the second Test against England at Vizag. Jayant has replaced Amit Mishra in this match. Other than Jayant, India also have Ravichandran Ashwin and Ravindra Jadeja as their spinners. Coincidentally, Jayant made his One-Day International (ODI) in the same venue, when India played New Zealand in the series decider few days ago. Jayant has 117 First-Class wickets to his name and also averages over 28 with the bat for Haryana, batting low down the order.

Broad completed 100th Test in the last Test and this time was the first to get a wicket in form of KL Rahul. India and England played out a draw in the first Test at Rajkot. England also have James Anderson back in the squad whohas not played Test cricket since August, when England played Pakistan at The Oval. He has since missed the Bangladesh tour and was flown in late for the series against India. 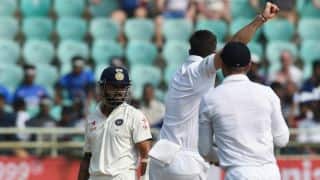 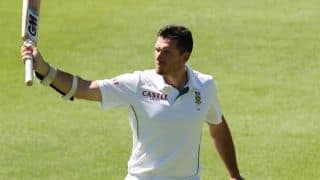