India ended Day Three at 98 for 3 in the second Test against England at Visakhapatnam on Saturday.

India’s captain is ensuring his 50th Test turns to be special with yet another fifty and this time he reached to his 13th fifty off 63 deliveries that included 5 fours on Day Three of the second Test. India’s top-order crumbled in no time after dominating Day Three with their spinners. Kohli is still not done after his knock of 167 and ensured it turns to be better and better with yet another fifty to his name. Complimenting Kohli is deputy Ajinkya Rahane who entered at No. 4 and built 58-run stand for fourth wicket. Rahane ended his day’s play at 22 while Kohli remained unbeaten on 56 India lost their top-order soon with Stuart Broad picking the opening batsmen and James Anderson grabbing Cheteshwar Pujara. Live Cricket Scorecard: India vs England 2nd Test at Vizag

England suffered tough time against Indian spinners as they collapsed with the fall of Ben Stokes and Jonathan Bairstow. Both the batsmen added 110 runs for the sixth wicket with their fifties. However, it was Ashwin s special day as he got to a new milestone and also bagged yet another fifer for 67 runs. India dismantled England for 255 providing lead of 200 runs for India.

The Alastair Cook-led side, which gave India a run for their money in the drawn Test in Rajkot, have struggled against the Indian spinners at Visakhapatnam which is hosting its first-ever Test. Stokes was the only highest run-scorer for his side with 70 while Root, Bairstow were dismissed for 53 respectively.

Root got to his fifty on his 50th Test and tried going the Kohli way. But his attempts failed and he was gone for soon after he secured his half century. India will expect to build a solid target on Day Four against England with Kohli and Rahane on the crease. 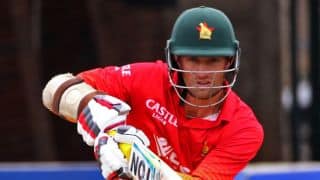