India set England a target of 154 to win the third ODI at Brisbane.

India are bowled out for 153 in 39.3 overs after England dominated most parts of the game, which means that England just need 154 runs to win from 50 overs to win the match. They can gain a bonus point, if they can finish the game within 40 overs, something they would love to achieve Steven Finn picked up five wickets in his eight overs as he finished with his career best figures of five for 33. This is Finn’s maiden five-wicket haul in One-Day Internationals (ODI).  James Anderson finished with four wickets for just 18 runs.

None of the Indian batsmen managed to make a big score after getting a start. Stuart Binny top-scored for India with 44 and he looked extremely comfortable throughout the innings until he top-edged one ball straight to Eoin Morgan at mid-off.

India, yet again got off to a bad start after they lost Shikhar Dhawan got off for just one in the very first over of the innings. Ajinkya Rahane and Ambati Rayudu then stabilised the innings with a 56-run stand but after he fell for 33, Suresh Raina, Virat Kohli and Rayudu  followed him back into the hut within a matter of few deliveries.

Skipper MS Dhoni and Stuart Binny, who is in this match in place of Ravichandran Ashwin put on 70 runs for the sixth wicket, which gave them a platform to get to a fighting total. But after Dhoni fell for 34, India collapsed from 137 for five to 153 all out within inside 40 overs. India will surely go on to rue not playing out the remaining overs as it should be an easy chase for England. India will certainly have to look back at their shot selections and hope that they give a better performance in the next game. 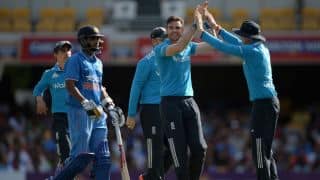