A circle turned full for England at Eden Gardens, Kolkata and they would have erased the memories of the World T20 final last year. England beat India by 5 runs to avoid whitewash.

Eoin Morgan finally smiled. A circle turned full for England at Kolkata. Another last-over finish, this time ending in a triumph, taking England one step closer to erasing the memories of World T20 final last year. Another circle turned full for Ben Stokes as England beat India by five runs to avoid a whitewash. India lost MS Dhoni in the 32nd over with India needing 149 from 110 balls. Kedar Jadhav, who scored 90 from 75, added 104 from 83 balls for the sixth wicket with Hardik Pandya (56 in 43) as India almost completed a whitewash. India needed 16 from the final over. Jadhav started with a six and boundary but Chris Woakes produced two dot balls and dismissed the diminutive right-hander with the next ball. Full cricket scorecard: India vs England, 3rd ODI

In the end, Hardik Pandya s all-round brilliance was overshadowed by his counterpart Stokes, who claimed 3 wickets after a brisk fifty that propelled England to 321. With 4 defeats in the Test series and a 0-2 scoreline in ODIs, England arrived in Kolkata without a win in this tour. Ahead of the three-T20I series, they have finally opened their account.

For the third time on a row, India lost early wickets. The track was good for batting despite uneven bounce that kept both sides at bay. There was also movement in offer for the bowlers, which English seamers used to their advantage.

It was unfortunate that David Willey could bowl only two overs before a shoulder injury prevented him from taking further part in the game.

For a fifth of the Indian innings it seemed Virat Kohli was batting on a different surface. Chris Woakes and Willey were able to getting sharp movement off the surface. Ajinkya Rahane was cleaned up by Willey with a delivery that swung in late in the second over while KL Rahul perished courtesy a needless overambitious pull attempt off Jake Ball.

Yuvraj Singh survived anxious moments at the start. Some of the deliveries from Woakes took off from the surface and kept missing Yuvraj s edge. The 10th over saw a delivery from Jake Ball kick up from good length before thudding into Yuvraj s chest. After the initial discomfort, Yuvraj unleashed glamorous pulls and drives. There was a touch of Cuttack in his innings but it was cut short for 45.

Meanwhile, Kohli wielded his willow like a wand, playing exquisite strokes all around the wicket. There was an attractive cover drive early in his innings. There were flicks reminiscent of Sachin Tendulkar. There were cuts and glides galore. It was only towards the later stages of his innings when he was in some discomfort, getting inside edges. He also survived a dropped catch.

He got to his 38th ODI fifty but could not finish it off as he edged a Stokes delivery to the gloves of Jos Buttler. En route his fifty, Kohli completed a thousand runs as India s ODI skipper. He achieved the milestone in his 17th innings, ahead of AB de Villiers (18), Kane Williamson (20), Alastair Cook (21) and Sourav Ganguly (22).

Despite the series win, India have plenty of headaches. All their openers in this series Shikhar Dhawan, KL Rahul and Ajinkya Rahane have failed. Dhoni s stay was short as well. There were glimpses of promise but the extra bounce on the surface beat the former captain as he edged one from Ball to Buttler.

On the flip side, India have derived confidence that they can still finish games without sizable contributions from their star chasers, Dhoni and Kohli.

Earlier, Kohli won the toss and elected to field with the dew in mind. Plays and misses were a major part of the day s plays. India s pace trio of Bhuvneshwar Kumar, Jasprit Bumrah and Pandya had their moments.

Jason Roy s third consecutive fifty set up the platform for England. Eoin Morgan s 43 and Jonny Bairstow s fifties got them to a strong position before Stokes and Woakes onslaughts guided them to 321. England could have got closer to 350 but for Pandya s second spell. Pandya, who had gone for 28 runs in his first 4 overs, came back strong in second spell, where he gave away 21 runs from 6 overs, accounting for the wickets of Morgan, Buttler and Bairstow.

The Eden Gardens game was redemption for Stokes, who was smacked for 4 sixes in the last over in the 2016 World T20 final at the same venue. Stokes 39-ball 57 and 3 wickets, which included Kohli s, was the best performance from the English camp, which earned him the Man of the Match.

The teams now move to Kanpur to play the first T20I series, which begins on Wednesday, January 26.

Man of the Match: Ben Stokes.

Man of the Series: Kedar Jadhav. 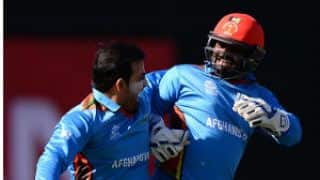 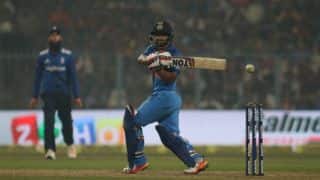