England s chances of saving this Test now rest on Joe Root's shoulders. For how long he resists on Day Four and whether or not he gets support from the other end will determine England s fortunes in the game.

Indian spinners replicated their effort with the bat when they came out to bowl and kept England to 78 for 4 at the close of play on Day Three of the Mohali Test. Ravichandran Ashwin, who had earlier scored 72 in India s first innings, got the all-important wicket of England skipper Alastair Cook once again besides dismissing Moeen Ali and Ben Stokes as well. Jayant Yadav got Jonny Bairstow for the second time in the match, making it India s day. Joe Root, England s biggest batting hope, was batting alongside the night-watchman Gareth Batty at stumps. England are in deep trouble as they still trail India by 56 runs with only six wickets remaining intact. Full Cricket Scorecard: India vs England 3rd Test at Mohali.

England started their second innings when the play resumed for the final session. Haseeb Hameed, who hurt his finger while fielding, did not come out to bat. He did not field on Day Three either, but with his injury being external, he would have been eligible to bat anytime in the Test. However, the three net sessions he had on Day Three also did not help him as Root came out to open with skipper Cook. Mohammad Shami, as usual, took the new ball and started the proceedings. Umesh Yadav bowled just an over from the other end before Virat Kohli unleashed his biggest weapon Ashwin.

Shami too got just three overs from the other end as Ravindra Jadeja joined Ashwin into the attack seventh over onwards. Runs dried up once the spin duo came in operation as the two English batsmen went on the defensive. An opportunity for India was just around the corner, and things started rolling in the ninth over bowled by Jadeja, when Cook survived a close lbw call. The original decision was not out, but the Indians reviewed it. The TV umpire, after a long delay that caused some anxious moments, stuck to the original call as the ball was missing the leg stump.

In the very next over, Cook survived again. This time though, the soft signal was out. But Cook s luck was by his side as the ball had pitched outside leg. Cook continued to live dangerously though and a couple of overs later, Ashwin cleaned him up with a peach as he got one to get through the gap between Cook s bat and pad. India needed wickets to apply pressure and the master spinner did it for them.

Moeen then came out to bat at a new position. After hitting a fighting ton in Rajkot, he somehow had lost his mojo in Visakhapatnam; scoring just 1 and 2. He fell early this time too, after being beaten by Ashwin for pace. He came down the track and hit one straight to Jayant at mid-on. Bairstow then walked out with the intention of seeing through the remaining time with Root, but was removed by Jayant. He fell for a delivery which kept low and did not turn. All he could manage was an edge which was brilliantly grabbed by Parthiv Patel behind the stumps.

Stokes then joined Root in the middle. The duo could add just eight runs when Ashwin struck again. It looked like the two will take England to stumps before an Ashwin delivery rapped on Stokes pads. India decided to review it after the umpire turned the appeal down and succeeded with it. Gareth Batty, the night-watchman, then saw through the remaining period.

A daunting task awaits England on Day Four. The watchful Root has looked impressive for his 36 not out. England s chances of saving this Test now rest on his shoulders. For how long he resists on Day Four and whether or not he gets support from the other end will determine England s fortunes in the game. They would also hope Hameed gets fit and comes out to bat, for they will need his services.

Earlier, India s all-round-duo of Ashwin and Jadeja started the Day Three well, getting their side past the England total and take vital lead. Ashwin was the first to depart after a fine 72 and missing out on his fifth Test hundred. Jadeja and Jayant then continued to frustrate England, adding 80 crucial runs for the eighth wicket and getting India closer to the 100-run lead. Jadeja then fell for 90 playing an ambitious shot after getting carried away. He had hit four boundaries off Chris Woakes two overs ago. Perhaps that pumped him up as he slogged one straight to the fielder at long-on boundary and missed out on his first international ton.

Unflustered by the surroundings, Jayant continued to march ahead, bringing his maiden Test fifty in the process. Umesh did give him some company, before the two batsmen fell in quick succession, handing Stokes a five-for and marking an end to India s first innings for 417. 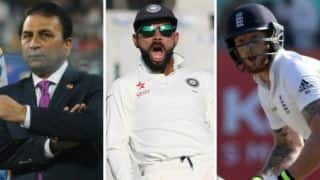