India vs England, 5th Test at The Oval: England take the honours on Day 1

India vs England, 5th Test at The Oval: England take the honours on Day 1

After bowling India out for 148, England are in firm control of the fifth Test at The Oval. Their openers ensured they went into stumps without any damage at 62 for no loss. Thus, the hosts look good to dominate India in the series finale.

India were put in to bat with overcast skies around The Oval. While England were unchanged, India brought in Stuart Binny and Ishant Sharma in place of Ravindra Jadeja and Pankaj Singh. The changes were somewhat expected going by the order at practice at The Oval leading up to the game.

The day started on a disastrous note as Gautam Gambhir edged his first ball to the wicketkeeper. The ball was shaping away as he tried to withdraw his bat, but managed the edge. In fact, Virat Kohli and Cheteshwar Pujara’s woes also continued. Both batsmen continued to bear the brunt of the opposition’s hold over their weakness.

While Pujara was bowled by an incoming delivery, Kohli left one that came in and hit his pads. In fact, he had left quite a few that were perilously close to the off-stump. Ultimately, Chris Jordan got the wicket. Chris Woakes too joined the party as he snared three wickets. England would feel glad that the two contributed for they were eclipsed by Stuart Broad and Anderson in previous Test matches.

At 44 for six, things looked bleak but MS Dhoni fought on. Wickets continued to fall though and he finally found an ideal foil in Ishant Sharma, who stitched a 58-run stand with him. With that stand, India crossed 100 and were marching towards 150. Dhoni picked up pace as the innings progressed and played some good crunchy drives through the off-side The shot that stood out was a six over long-off which went way back into the stands.

India were ultimately bowled out for 148 when Dhoni hooked to the deep. He was on 82 then and had scored more than 50 percent of India’s runs. Chris Woakes and Jordan took three wickets apiece.

Sam Robson and Alastair Cook were solid and did not give India a chance. They ended the day on 62 for no loss. Robson has looked particularly good on 33 and seems set to get a good score. 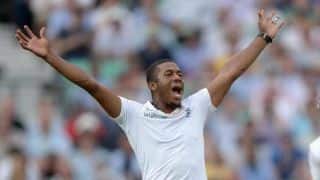 Did Chris Jordan take a clean catch to dismiss Ajinkya Rahane in India vs England 5th Test at The Oval? 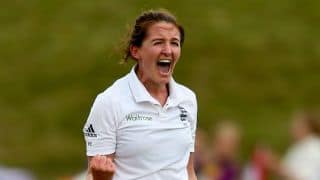