The Indian and English team members wore black bands with both teams observing silence before the national anthem during Day 1 of 5th Test.

India and England, who are playing their final Test at MA Chidambaram Stadium in Chennai, observed a minute s silence ahead of the Test to pay respect to Late Tamil Nadu Chief Minister Jayalalithaa. She passed away following a cardiac arrest on Sunday, December 4. The Indian and English team members wore black bands with both teams observing silence before the national anthem. Jayalalithaa, was suffering from breathing issues and was admitted for as many as 75 days at the Apollo Hospital in Chennai. The rumours spilled out regarding her death well before a formal announcement came out from the hospital. However, on Monday evening the news broke out on her death and the entire city went in a state of mourning.

Numerous preachers lost their life in shock of Amma s death. India cricketers hailing from Chennai, Ravichandran Ashwin and Murali Vijay tweeted offering condolences to Amma and the suffering caused by Cyclone Vardah. The state observed seven-day mourning, post which cyclone Vardah struck Chennai on Monday, killing over 10 people in the state. There were thousands of fallen trees across streets and India-England final tie was under threat. But the groundsmen at the MA Chidambaram Stadium did their part to dry the pitch with coals to ensure the Test started promptly. A bit of spells here and there also did not affect the start of the match.

Earlier in the day, England won the toss and opted to bat. Both teams made a few changes to their side where India s budding star Jayant Yadav was rested due to hamstring and brought Amit Mishra as replacement. Bhuvneshwar Kumar was benched with Ishant Sharma returning to the Test side post the West Indies series. 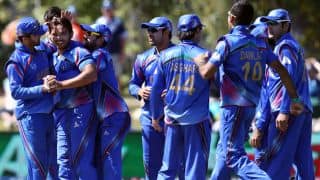