England s only aim will be to bat throughout to force a draw and avoid their fourth defeat against India.

Battered and bruised, but yet to be beaten, England will walk out to bat on the fifth and final day at Chennai in the final Test of what has been an horrendous trip to India so far. A few months ago, England were flirting with the top spot in ICC Test rankings. But on Tuesday, England will take field to save their fourth defeat on the trot. The last time when England lost these many matches, they went under an overhaul. This time, we will have to wait and watch to see if at all this humiliation at the hands of India, Virat Kohli, Ravichandran Ashwin, Cheteshwar Pujara, KL Rahul and last but not the least, Karun Nair, will result in any casualty.

In what looks like an already lost battle England will walk out to bat on Day Five of the fifth Test against India, trailing by another 270 runs in the second innings. The MA Chidambaram Stadium in Chepauk, Chennai, haswitnessed its second 300-run knock being played by an Indian. Karun Nair remained unbeaten on 303 with India declaring their innings for a gigantic 759 for 7. Nair s knock broke plenty of records and was crucial behind India s all time best total in Tests against any opponent. England s only aim will be to bat throughout to force a draw and avoid their fourth defeat.

India have already shut England out of the contest. If they can spark a batting collapse on a deteriorating wicket, India will have a 4-0 win. The team, barring Karun Nair, will have had ample rest to start afresh on Day Five. The pitch has supported spinners and it could turn into a a happy hunting ground for the spin-double of Ravichandran Ashwin and Ravindra Jadeja.

For England, adding to it will be the physical and psychological stress of watching India reply to their 477 with a colossal score. All this will act in favour of the hosts and the match is likely to end in a draw, which will be the best for the visitors, if not in favour of India. But for that, England will have to try batting for 90 overs.

In this series, the highest that England have scored is 537 in the first Test. After fielding for two long days, the Englishmen must be tired physically to play dig in. More concern is regarding Alastair Cook s partner Keaton Jennings, who has failed in both the occasions since his debut century, which was his claim to fame.

Both Jadeja and Ashwin have been elemental in posing a lot of threat to the English batsmen producing turn, and at times, even troubling them with straight ones. More is expected to be on offer for the duo on Day Five and these two, especially local lad Ashwin, is expected to make full use of that.

England s strategy must be to survive the Indian bowlers for the day to at least force a draw. The onus will be upon Cook, Joe Root, Moeen Ali, Jonny Bairstow and Ben Stokes to face the bulk of overs and spend time at the crease to lighten the burden over the lower-middle-order, if they require to come out and bat.

Sometimes, runs come from the most unexpected batsmen. Like my colleague Rohan Sawant said the previous day, England were prepared for Virat Kohli, but KL Rahul came out of the syllabus . For India, a similar incident may occur if they take the English lower-middle-order lightly. Adil Rashid and Liam Dawson have already showed their batting skills in the first innings of the match, building up a 108-run partnership.

England need 270 more runs to make India bat again. But the hosts will be in full throttle aiming for the 10 wickets that stand between them and a 4-0 scoreline. It will be interesting to see how Kohli utilises Amit Mishra, the only leg-spinner in the team.

As the trend has been, batting for England in the second innings, only Cook, Root and Bairstow have been successful in the series. Bairstow, who kept the wickets throughout the entire India innings despite the presence of Jos Buttler in the playing XI, looked surprisingly energetic and it will be great to see him bat equally well on Day Five. The innings will also be a chance for Jennings to prove that he is not a one-match-wonder and has the potential to become a regular member of the England team.

Another interesting thing will be to see Umesh Yadav and Ishant Sharma bowl on Tuesday and how many overs they get to bowl. Ishant will be keen to strike early with the new ball which is only 5 overs old, while Umesh has shown signs of drastic improvement but the challenge will be to produce something off the Day Five pitch against England batsmen.

All in all, the Indian batsmen have already set the stage and it is now up to the bowlers, especially the spinners, to add the cherry topping so that the hosts can end the Test series on a positive note and head to limited-overs games high on confidence. 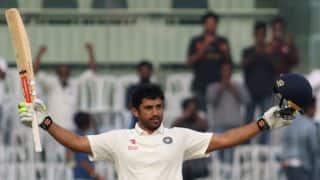 India vs England 5th Test Day 4: Karun Nair’s 303 not out, India’s run-fest and other highlights Trevor Bayliss: England's catching has been below par vs India