The second ODI between India and England is scheduled to be held in Cuttack on January 19, 2017.

Bhubaneshwar: In the back drop of the embarrassing situation when spectators hurled projectiles during India-South Africa match last year, the state administration and the Odisha Cricket Association (OCA) assured an England Cricket Board (ECB) team that all steps would be taken to ensure smooth matches at Barabati Stadium in future. A three-member ECB team on Friday met Bhubaneswar-Cuttack Commissioner of Police Y B Khurania to take stock of the security arrangement for the second ODI between India and England scheduled on January 19, 2017. “A preliminary discussion on security arrangements was held where ECB and OCA officials were present. The ECB officials wanted to know about security arrangements at airport, hotel and stadium. We have given them assurance that we will make foolproof security arrangement at all the places,” Khurania told reporters after the meting. READ: India vs England 2016-17: Full schedule announced

He requested the English team to let the police know the players’ itinerary well in advance. “We will put in our best efforts on the security front,” Khurania said. Meanwhile, OCA authorities have decided to cut down on the seating capacity of Barabati Stadium at Cuttack from 45,000 to 41,000 for the upcoming event.

“Adequate drinking water arrangement will be made at all stands of the stadium, as such water bottle will be strictly prohibited into the stadium on match day,” the OCA said in a release adding that it has been decided to incorporate more areas under the CCTV camera surveillance during the match. READ: Ian Botham disappointed with Indian cricket’s current state

The wire fencing between the gallery and field would be heightened to ensure that nothing gets into the playing area even if flung from the gallery. All the seats would also be numbered and the seat number would be marked on the ticket to keep a track on the movement of the spectators, it said.

The OCA was embarrassed in October last year during the India-South Africa match when spectators hurled water bottles into the field as the Indian players could not perform upto their satisfaction. The ECB team also discussed with the hotel management. 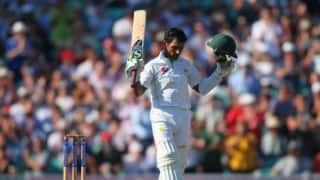