Cook needs 147 to go past Sangakkara and finish as the leading run-scorer among left-handed batsmen.

England have already claimed the Pataudi Trophy with an unassailable 3-1 lead over India. The fifth (and final) Test of the series, at The Oval, has thus been reduced to a dead rubber. However, both sides will want to win the most of this Test and want to sort out their respective issues. The Test will also mark the exit of Alastair Cook, England s most prolific run-getter. Ahead of the Test, here is a statistical preview.

1 win and 4 defeats for India at The Oval, the only English ground where India have won exactly one Test their first in the country, in 1971. They have won twice each at Lord s, Headingley, and Trent Bridge, and none at Edgbaston, Old Trafford, and the Rose Bowl.

10 instances of India winning 2 or more Tests in an overseas series till date (1 of these are in Zimbabwe and 2 in Bangladesh). If they win at The Oval it will be their 11th such instance and 2nd in England (after their 2-0 win in 1986). It will also be the 2nd instance of India winning 2 Tests in an overseas series but still losing the series (they had lost 2-3 in Australia in 1977-78).

1.863 win-loss ratio for England at The Oval, where they have played exactly 100 Tests.

49 Tests for Ajinkya Rahane. If picked, he will become the 32nd Indian and 280th overall to play 50 Tests. Of Indians, EAS Prasanna and Kiran More finished their careers with 49 Tests each.

5 wickets needed by James Anderson (559) to go past Glenn McGrath and seal 4th spot on the list of all-time wicket-takers (and become the top wicket-takers among fast bowlers).

147 runs needed by Cook (12,254) to go past Kumar Sangakkara and seal 5th spot on the list of all-time run-scorers (and become the top run-scorers among left-handed batsmen).

1 wickets needed by Stuart Broad (431) to go past Richard Hadlee and seal 8th spot on the list of all-time wicket-takers. Broad is currently tied with Hadlee and 3 wickets behind Kapil Dev.

2 catches needed by both Cook and KL Rahul (11 each) to become the leading catcher among fielders in an India-England series. Only Eknath Solkar (12 in 1972-73) has held more.

3 uncapped players in the Indian squad Shardul Thakur, Prithvi Shaw, and Hanuma Vihari. They may add to the list of 291 Indian capped players. 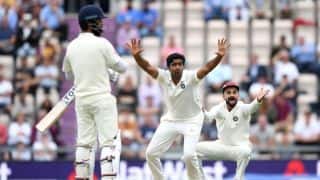