England beat India in the first Test of the five-match series, at Edgbaston, Birmingham, by 31 runs after ten sessions of intense battle. Virat Kohli waged a lone battle with bat for India, top-scoring in each innings with 149 and 51. However, his efforts were trumped by 20-year-old Sam Curran, playing only his second Test, who took 4 for 74 and 1 for 18 to go with his 24 and 63. The teams now move to Lord’s, where England will take field without Ben Stokes. Ahead of the Test, here is a statistical preview.

1 win needed by Kohli as captain to go past Sourav Ganguly (21) and reach second spot among Indian captains in history. Only MS Dhoni (27) has won more Tests as captain.

6 wickets needed by James Anderson to reach the 100-wicket mark at Lord’s. No fast bowler has taken a hundred Test wickets at a single ground. Heath Streak (83 wickets at Harare Sports Club is second on the list). In fact, Anderson is the only non-Sri Lankan in the top six: the other entries are Muttiah Muralitharan (166 wickets at SSC, 117 at Kandy, 111 at Galle) and Rangana Herath (99 wickets at Galle, 84 at SSC).

3 wickets needed by Broad (419) to break through to the top ten in the list of all-time wicket-takers. Broad is 2 wickets behind Pollock and Dale Steyn. His teammate Anderson is at 5th spot, with 544.

54 runs needed by Jos Buttler (946) to reach the 1,000-run mark in Test cricket. Buttler will become the 102nd English cricketer and 536th overall to the landmark.

2 uncapped players in the Indian squad — Rishabh Pant and Shardul Thakur. They may add to the list of 290 Indian capped players.

2 uncapped players in the English squad — Jamie Porter and Ollie Pope. They may add to the list of 686 English capped players. 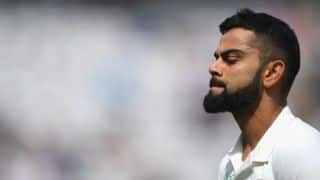