Addressing reporters after the senior Tournament Committee meeting here, BCCI Secretary Ajay Shirke said the board is in constant touch with the Tamil Nadu Cricket Association on the matter.

Mumbai: The Board of Control for Cricket in India (BCCI) on Tuesday said the fate of the fifth and final Test against England, scheduled from December 16 in Chennai was still undecided, following the death of Tamil Nadu Chief Minister Jayalalithaa. The Tamil Nadu CM was declared dead at the Apollo Hospitals on Monday night after a 74-day battle for life. Addressing reporters after the senior Tournament Committee meeting here, BCCI Secretary Ajay Shirke said the board is in constant touch with the Tamil Nadu Cricket Association on the matter. “BCCI condoles the sad demise of the Tamil Nadu Chief Minister, Ms. J. Jayalalithaa,” he said.

“BCCI would like to inform that no decision has been taken regarding hosting of the fifth match of the Test series against England in Chennai from December 16. BCCI is in constant touch with Tamil Nadu Cricket Association and local authorities and constantly monitoring the situation. BCCI fully understands the sensitivity of the matter and will keep everyone informed,” Shirke added. Shirke also informed that the Group B Ranji Trophy game between Orissa and Jharkhand, which was slated to played at Dindigul in Tamil Nadu from Wednesday, has been rescheduled. “The Round- 9, Group B game of the Ranji Trophy, between Orissa and Jharkhand, which was suppose to take place in Dindigul from December 7 will be rescheduled. Fresh venue and dates of this match will be announced soon,” he said.

The board’s senior Tournament Committee also decided to revoke rescheduling of matches between Bengal and Gujarat and Hyderabad and Tripura, which had to be called off due to smog in New Delhi last month, and instead awarded one point each to all the four teams. 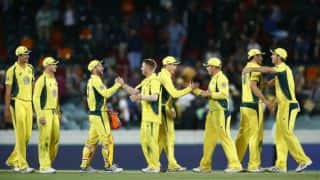