Only 54 wickets have been claimed of the possible 80 that could have fell in the last two Tests that have been played there. There ought to be no reason why a captain shouldn't be going for a balanced attack rather than loading it with one or the other type of bowlers

Mohammad Shami has indicated that the Indian pace attack would look to target injured Jonny Bairstow in the fourth Test against England at Southampton. Bairstow has been the top-scorer for England in the Pataudi Trophy 2018 with 206 runs in five innings with two half-centuries, at an average of 41.20. He suffered a minor finger injury while keeping wickets in the Trent Bridge Test but has expressed willingness to play despite of that for England in Southampton.

Obviously, when you see that you have an option where you could target a batsman s weakness or where he is feeling uncomfortable. As a fast bowler you want to work on that and hit on his weak zone,” said Shami in an interaction with the media two days prior to the start of the Southampton Test.

He went on to say that it is the duty of fast bowlers to deliver for the team and they have performed when they have been asked to in the past. “The responsibility is on fast bowlers to deliver in these conditions. We try out best and we have been trying our best. In the last series (in South Africa), you have seen we have done our job well too (picking 60 wickets in three Tests). So the attempt is to not look at this entire series, but take it match by match. It is better for us to shorten it and look at it in that manner,” said Shami.

Shami had a few important points concerning strategy for the skipper and coach to ponder about as well. He indicated that the bowling attack should be balanced and not too heavily loaded towards being pace-heavy as a wicket generally does slow down in a Test match going towards day five in normal circumstances.

“I feel that it is tough to decide that we will play five fast bowlers for sure in a Test match. The wicket definitely turns on the third, fourth and fifth day in any Test match. Hence, you cannot count numbers but a spinner should definitely play,” he said.

He, however, lauded Virat Kohli‘s chop and change policy as it keeps the fast bowlers fresh and up for the challenge. “We have such a bench strength that is so strong that we can change if we want to. Even if we don’t change, we have such players that can bowl long spells in this format. But this chop and change policy is good (for the pace attack) because it allows us time to recover. So we have Test bowlers to play Test cricket and those who have ODI skills are playing shorter formats as well, to help raise the levels there,” he added.

“I am sure that a result would definitely come in the Southampton Test looking at the wicket,” he went on to say.

Rose Bowl in Tests from bowlers’ point of view so far:

Out of the possible 40 wickets that could have been taken in the last Test played between India and England at Southampton, only 31 were claimed. England didn’t get bowled out even once by the Indian bowlers last time around there. James Anderson was named Man of the Match for his superb spell in the first innings of India where he claimed 5/53 and combined well with Stuart Broad who also took three wickets to bowl India out for 330 on a good batting track.

Moeen Ali gained a rich harvest with match figures of 8/129 with figures of 6/67 in the second innings of the 2014 Test that spelt doom for India who got bowled out for 178 chasing a target of 445 runs. Spinners cutting across sides in the particular Test claimed 15 of the 31 wickets that fell, pacers claimed 15 and there was one run out. The pitch behaved much better for pacers in the 2011 Southampton Test between Sri Lanka and England where they claimed a rich bounty of 21 wickets out of the 23 that fell in the Test, the remaining two went to Graeme Swann, former England off-spinner.

Let’s see what kind of conditions would be on offer in Southampton this time around. But Southampton could safely be assumed to be batting-friendly, since only 54 wickets have been claimed of the possible 80 that could have fell in the last two Tests that have been played there. There ought to be no reason why a captain shouldn’t be going for a balanced attack rather than loading it with one or the other type of bowlers.

The Southampton Test starts on 30 August at the Ageas Rose Bowl in Southampton. England lead the five-match series 2-1 going into the fourth Test. 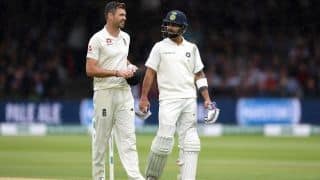