Soft dismissal for Vijay Zol caught at covers for 48 runs.

Vijay Zol has been dismissed for 48 after pulling India out from a muddle in their ICC Under-19 World Cup 2014 quarter-final against England at the Dubai International Cricket Stadium. India were in early trouble at 26 for four, but Zol and Deepak Hooda’s 87-run partnership helped then move past hundred. While Zol was dismissed, Hooda completed his half-century keeping the team alive. Sarfaraz Khan is batting alongside Hooda.

Zol was dismissed when he tried to play an uppish shot through covers off spinner Rob Sayers. He instead spooned a catch to cover. That has brought Sarfaraz Khan to the middle and India will depend on him and Hooda again to get them a competitive total. 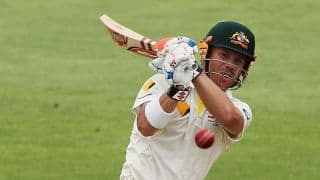