Saqlain Mushtaq was appointed by ECB for their home series against Pakistan and his contract has been extended till the final Test with India at Mohali.

Newbie Zafar Ansari has recently thanked team’s spin-bowling consultant Saqlain Mushtaq for the mental boost he provides the team’s bowlers and in turn compared him with a cheerleader. The former Pakistan bowler was appointed by the England and Wales Cricket Board (ECB) for their home series against Pakistan while his contract has been extended till the final Test with India at Mohali. Saqlain, who with a very brief period in hand to work with team’s bowlers, could hardly bring in any successful technical changes in the bowlers’ action, his constant backing has helped the players do well, believes Ansari. FULL CRICKET SCORECARD: India vs England, 2nd Test at Visakhapatnam

In an interview with espncricinfo.com, Ansari said, “He has made it explicit that he didn’t want to come in and change anything. He hasn’t had time to change our actions and, in the lead-up to Test, the last thing you want to be doing is changing what you’re doing. He acts as our cheerleader to some extent. He boosts us and makes us feel good about ourselves. And as someone who has been so successful to come in and say ‘I think you’re a good bowler and I think you can take wickets at this level’, that gives you a lot of confidence and that is important for Test cricket.”

“It’s more about your approach to bowling and bowling in Test cricket. How you can maintain your composure when batsmen are coming at you, when the crowd is loud and when you’re playing on TV. All these external factors, he brings a certain perspective to that.”

England will play the second Test with hosts India at Visakhapatnam starting from Thursday. 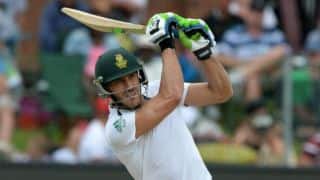