India vs Essex Practice Match, Day 3: As it happened

India vs Essex Practice Match, Day 3: As it happened

Follow all the live cricket score updates from the Day 3 of India vs Essex 2018 tour match on CricketCountry.com

Who should open for India in the first Test against England?

What a surprise! The match has ended in a draw after rain forces the players to their respective dressing rooms. India faced 21.1 overs in their second innings scoring 89/2 and stretching their lead to 125 runs. KL Rahul (36*) and Ajinkya Rahane (23*) remain unbeaten.

Over 18: An expensive over from Paul Walter after Rahane clatters two fours in it. A third boundary came via leg byes. India 77/2, lead by 113 runs

Over 17: Positive intent from Rahul and Rahane. They have each struck a four in the first two overs after the tea break. India 64/2, lead by 100 runs

Paul Walter will bowl the first over of the final session. Facing him is Ajinkya Rahane

Over 15: TEA-BREAK: So the second session has ended and India have lost opener Shikhar Dhawan (0) and Cheteshwar Pujara (23). They have reached 53/2 and have a lead of 89 runs.

Over 13.1: OUT! Paul Walter is having a memorable game. He has gotten rid of Cheteshwar Paujar on 23 who has been caught by Varun Chopra. India 40/2, lead by 76 runs

Over 10: Paul Walter, Essex’s top-scorer, has been introduced into the attack. Matt Coles and Matthew Quinn have been taken off. Coles bowled five overs for nine runs while Quinn bowled four overs for five runs and a wicket. India 28/1, lead by 64 runs

Over 5: Pujara has joined Rahul in the middle after Dhawan’s early dismissal. With the help of a boundary, he is batting on 5 while his partner is yet to get off the mark. India 9/1, lead by 45 runs

In case you were wondering how Dhawan was dismissed. In his defense, that one was a beauty

Over 1.3: OUT! That’s another duck for Shikhar Dhawan after he’s bowled by Matthew Quinn. Cheteshwar Pujara walks in at No. 3. India 4/0, lead by 40 runs.

KL Rahul has walked out to open Indian innings with Shikhar Dhawan.

Over 93: Nijjar and Khushi seem to have shut the shop for now. They have played three maidens in a row. So Virat Kohli has brought back Shardul Thakur into the attack now. Essex 354/8 | India 395

Over 88: Like the first session, Ishant and Shami have bowled the first two overs. Ishant’s went for three runs while Shami bowled his third maiden of the innings. Essex 348/8 | India 395

We’re back! Ishant Sharma will resume the proceedings for India

Over 86: So Hardik Pandya has just bowled the last over before lunch and Feroze Khushi has clattered him for two fours in it. Essex now trail India by 50 runs. Essex 345/8 | India 395

Kohli has brought Ishant back into the attack

Another bowling change from India: Hardik Pandya is into the attack now

Over 76: Another bowling change – Right-arm medium pacer Shardul Thakur into the attack now. Walter hits him for a four off the third delivery. Essex 298/7 | India 395

Over 75: Good news for Indian fans. Ravichandran Ashwin is back on the field and has just bowled his first over of the match – a maiden to start with. Essex 294/7 | India 395

Over 72.2: FIFTY for Paul Walter – reaches the landmark with a four off Kuldeep Yadav who is proving to be expensive. Essex 288/7 | India 395

Over 71.1: OUT! Umesh strikes in consecutive overs. This time he has Matt Coles caught by Shikhar Dhawan for a duck. Essex 283/7 | India 395

Over 68: Second bowling change in Umesh Yadav. He also ends up being hit for a four in his first over of the day as Foster records his eighth four. Essex 267/5 | India 395

First bowling change of the day. And for the first time, chinaman Kuldeep Yadav introduced into the attack

Over 61: First four of the day flows from the bat of veteran James Foster – his fifth of the innings. And it takes him to 28 off 56 deliveries. Ishant’s second over of the day results in seven runs – a boundary to Foster and a triple to Walter. Essex 246/5 | India 395

Over 60: So Ishant Sharma and Mohammed Shami have kick-started the day for India. Ishant’s first over of the morning session resulted in two runs – a single each to Walter and Foster. Mohammed Shami bowled his first maiden over of the innings. Essex 239/5 | India 395

Indian bowlers had a tough day in the field, especially in the second and third session on a hot and humid day two of their only tour match ahead of the England Test series against Essex at Chelmsford on Thursday. The hosts, riding on enterprising knocks from skipper Tom Westley (57) and Michael-Kyle Pepper (68), scored 237/5 in reply to India s first innings total of 395 all-out.

At the close of play, veteran James Foster (23*) and Paul Walter (22*) saw out the Indian attack and had built an unbeaten stand of 51 runs between them with Essex trailing the visitors by 158 runs.

Indian bowlers can expect another tough day unless they can get rid of the lower order quickly. There have been few positives for the hosts as far as bowling is concerned with Umesh Yadav and Ishant Sharma finding the rhythm. However, the duo of Mohammed Shami and Hardik Pandya endured a wicketless day, failing to hit the right lengths and proving expensive too. Shardul Thakur leaked runs as well but managed to put his name in the wickets column with the scalp of Westley.

There were only two overs of spin from India with Ravindra Jadeja delivering both of them. R Ashwin did not bowl and was instead rested like he was during Indian innings after hurting his index finger during batting practice. VVS Laxman tried to stop me from going shirtless at Lord’s in 2002: Sourav Ganguly 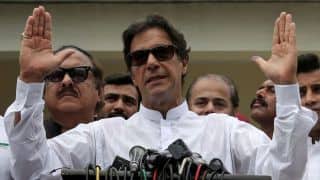