With India in a spot of bother at 147/5 after the fall of Kohli's wicket, Rahul and Karthik joined forces to produce some exhilerating strokeplay to register a century stand of 114.

Dinesh Karthik (82*) and KL Rahul (58) staked serious claim to their positions in the first Test against England at Birmingham with their attacking half-centuries against Essex at Chelmsford on Wednesday. Karthik, in particular was merciless in his onslaught as he stroked 14 boundaries in his unbeaten knock of 82*. At the close of play, Karthik was batting with Hardik Pandya (33*), with India 322/6 in 84 overs with the duo adding 61 runs so far for the seventh wicket.

Rahul and Karthik didn’t put a foot wrong in their innings and continued the resurrection process started by Vijay and Kohli. With India in a spot of bother at 147/5 after Kohli’s wicket, the duo joined forces to produce some exhilarating strokeplay to register a century stand of 114.

India vs Essex, Day 1: As it happened

Earlier, Kohli and Vijay had united at the fall of Ajinkya Rahane for 17, at which point India were 44/3 in 18.3 overs. Kohli began in a hurry, hitting four boundaries in his first 18 balls faced, and followed the more resolute Vijay to a half-century once the afternoon session began.

Kohli got his eye in and played in an assured manner during his knock of 68 runs off 93 balls, which contained 12 boundaries. He got out to the medium pace of young left-armer Paul Walter. However, Kohli would take confidence from his first innings in long format on the England tour, where his strike rate touched 73.11. Considering that there has been a lot of criticism for his poor average of 13.6 over 5 Tests on the last tour of England in 2014, this innings of 68 against Essex could be a good omen for the upcoming Test series.

On the other hand, Vijay s application at the crease was in keeping with his reputation as a batsman of pedigree in England (he scored 402 runs in five Tests in 2014), and that watchful approach helped India gain ground after their openers fell cheaply. He also got out bowled to the left-arm medium pace of Walter.

When Kohli won the toss and chose to bat, he would have hoped that the top order gets going against Essex s bowling in humid conditions, but the result was far from satisfactory. Shikhar Dhawan, his place in India s XI for the Edgbaston Test far from secure, was out first ball to Matt Coles, edging behind to the veteran wicketkeeper James Foster.

India would be satisfied with the performance of their middle order but the failure of Shikhar Dhawan and Cheteshwar Pujara would certainly make the Indian think tank to ponder over the final XI for the first Test against England.

On the other hand, seamers Matthew Coles and Matthew Quinn were the pick of the Essex bowlers with figures of 2/31 and 1/27 respectively. Walters picked two wickets himself but was expensive, leaking 90 runs in his 15 overs. 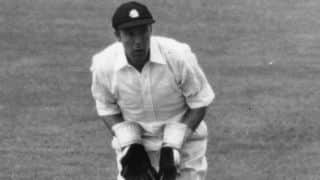