Hardik Pandya will lead the Indian cricket team against Ireland in the first T20I match of the series at the Malahide Cricket Club on Sunday. The visitors will be hoping to start the series on high with a win in the first match.

India have named a 17-member squad for the series with Rahul Tripathi, Arshedeep Singh, and Umran Malik as the uncapped players. The visitors recently played a five-match T20I series against might South Africa which ended in a 2-2 draw. The fifth match of the series was washed out due to heavy rain at the M Chinnaswamy Stadium in Bengaluru.

A bit of rain is expected during the first T20I match against Ireland as well. According to weather.com, The sky will be cloudy and there will be a 71% chance of rain. The temperature will be around 13 degrees Celcius and the humidity will be 83%.

The selectors retained most of the players for the current series. Rishabh Pant captained the Indian team against South Africa but isn’t available against Ireland as he is the team for the Test match against England. He is currently playing in the warm-up match against Leicestershire. Bhuvneshwar Kumar, Yuzvendra Chahal, Dinesh Karthik, and Ishan Kishan, are also part of the team and are expected to play in the first match as well.

Suryakumar Yadav is back in the squad for this series and will come in the third place before Venkatesh Iyer.

The pitch is expected to suit the batsman. The pacers do get the bounce from the surface at the Malahide Cricket Club but the ball comes to the bat pretty good as well.

The flick of the coin is once again expected to play a massive role as the captain who will win the toss is expected to bowl first. The toss will take place at 8:30 PM IST. 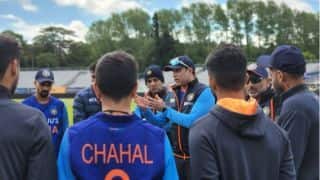 Ireland vs India Live Streaming 1st T20I in India: When and Where to Watch