Seifert tonked seven boundaries and six maximums in just 43 deliveries to top scored with 84, a knock that proved to be the difference at the end.

India were handed a record 80-run defeat in the first of the three-match Twenty20 Internationals against New Zealand at the Westpac Stadium in Wellington on Wednesday. The major loss brings an end to stand-in captain Rohit Sharma s seven successive wins as skipper joint most along with MS Dhoni.

New Zealand piled on a massive 219/6 after being put into bat. The Black Caps got off to one of their best starts with openers Colin Munro and replacement Tim Seifert blazing their way to a 86-run start in 8.2 overs. (WATCH: Dinesh Karthik drops sitter, redeems himself with stunner)

The imperious partnership was brought to an end by Krunal Pandya, who dismissed Munro for 34 off 20, but Seifert kept hurting India. The 24-year-old Northern Districts wicketkeeper-batsman tonked seven boundaries and six maximums in just 43 deliveries to top scored with 84, a knock that proved to be the difference at the end.

It was a great way to start the series and the boys are really happy. It feels great to go up the order, look at the first two overs and then go from there and put pressure on the bowlers, Seifert, who won the Man of the Match award playing in his ninth T20I, said at the post-match presentation ceremony. (ALSO READ: Now, Kuldeep Yadav will be our No.1 overseas spinner: Coach Ravi Shastri indicates shift in plan)

I have been selected for a reason and it feels nice to have backed my ability, he added. 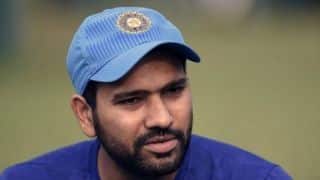