India had a lead of 215 runs at the start of Day Four of the first Test against New Zealand at Green Park, Kanpur. The in-form duo of Murali Vijay and Cheteshwar Pujara were yet again in the thick of action. The pair had added 112 runs for the second wicket in the first innings. India were in a similar position in the second innings as well. KL Rahul scored runs at a brisk pace, giving India a blistering start. And the onus was then on Vijay and Pujara to carry on the momentum. Overnight they added 107 runs.

The awesome twosome of Vijay and Pujara have stitched 1,796 runs at 64.14, in 29 innings. They also have 370-run stand to their name. It came against the powerhouse Australia at Hyderabad. Given the kind of form they are in, they are expected to emulate something similar on Day Four as well. On the other hand, Indian batsmen cheaply gave away their wickets in the first innings. The same conundrum was looming over India. Though they had a reasonable lead, there was no margin for error. India still needed another 200 runs to put New Zealand in a spot of bother.

Vijay and Pujara walked in on a bright Sunday morning. The Kanpur crowd roared in excitement. Meanwhile, other cricket-fanatics switched on their TV sets. The run-fest was on the cards, on God’s day.

The first five overs did not produce any boundary. There was turn and bounce. The ball beat the outside edge. New Zealand could smell a wicket early morning. Also read: Sehwag sends birthday wishes to the legend, who ‘cheated batsmen with a cherry in hand’

Vijay, losing his patience, shimmied down the track and lofted one over Ish Sodhi’s head. Kane Williamson, meanwhile, brought mid-on and mid-off up, trying to mount pressure on Vijay. The next delivery deceived Vijay, who completely misread the line. A shout of lbw echoed the stadium. Umpire turned it down.

Mitchell Santner, from the other end, kept the Indian batsmen at bay. New Zealand gave license to Sodhi, to bowl attacking line and length. He varied his pace to unsettle the opposition. He generated extra bounce. Pujara, however, looked in ominous touch. He read the New Zealander well. He played a late-cut, registering his first boundary of the morning.

Santner continued with his disciplined bowling attack. He knocked over Vijay with a slider. The ball held its line, forcing Vijay to play for the turn. He perished on a well-made 76.

That brought India captain Virat Kohli in the middle. Everyone had a ‘Sachin Tendulkar’ d j vu. No, the batsmanship is polar opposite. It’s the crowd-cheering that took us down memory lane.

New Zealand introduced Mark Craig into the attack. The track started posing trouble to the batsmen. Amidst all this, Pujara looked extremely comfortable. On the other hand, Kohli edged one to the boundary line. All the same, runs did not come with ease. India had to work hard to keep the scorecard ticking. Also read: Eden Gardens gears up for India’s 250th Test at home

Kohli edged one more to the fence. That did not matter. India kept fetching the runs.

New Zealand were mindful that India dished out a plan to score runs at an alerting pace. They knew they had to play on India’s nervous, forcing them to lose their patience. Kohli gave them exactly what they wanted. He played a rash shot. He played an aggressive stroke off Craig. He played a mindless sweep, top-edging it straight to Sodhi at mid-wicket. To put things into perspective, Kohli has churned out only 94 runs in the last 6 innings at 15.67, since his double-hundred. The scorecard read 214 for 3, with a lead of 270 runs.

Rahane and Pujara shouldered the responsibility to build a big score. Pujara was already set. It was Rahane who had to get accustomed to the conditions. Given his class, he took very little time to hit his first boundary. He played a top-drawer shot on the back foot. All the same, Sodhi got the better of the rampaging Pujara. He came round the wicket, bowled on Pujara’s pads and produced an outside edge to first-slip. Yet another start was thrown away, as Pujara had an ideal opportunity to reach the three-figure mark. Also read: Williamson’s dismissal was game-changer, says Jadeja

Rohit Sharma joined his fellow Mumbaikar Rahane. They have batted together many a time before. They know each other’s brand of cricket. However, it is now their test of execution as well as endurance. In addition, there’s enough time left in the match. However, barring the rain threat, India need not worry. 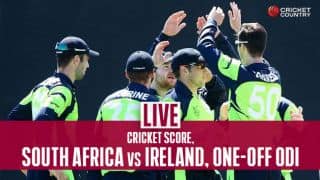 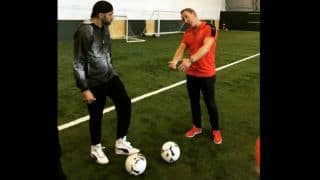