Statistical highlights on Day Four of the second and final Test between India and New Zealand.

Statistical highlights on day four of the second and final cricket Test between India and New Zealand at Basin Reserve.

# James Neesham‘s unbeaten 67 off 96 balls is the third highest score by a New Zealand number eight batsman on Test debut. Scott Styris (107) vs West Indies at St.George’s in June 2002 and Bruce Taylor (105) vs India at Eden Gardens, Kolkata in March 1965 are the two centurions for New Zealand at number eight.

# The unbroken 125-run partnership between Brendon McCullum and Neesham is New Zealand’s highest stand against India at Basin Reserve, Wellington in Tests.

# BJ Watling (124 off 367 balls) has recorded a career-best score in Tests, eclipsing 103 off 182 balls vs Bangladesh at Chittagong in October last year. His first Test hundred was 102 not out vs Zimbabwe at Napier in January 2012.

# Watling became the third New Zealand wicketkeeper to register a hundred against India. Ian Smith had recorded 173 off 136 balls at Auckland in February 1990 and McCullum – 115 off 140 balls at Napier in March 2009.

# McCullum’s unbeaten 281 off 525 balls is his career-best score in Tests — the second highest by a New Zealand player in Tests behind 299 by Martin Crowe against Sri Lanka at Wellington in 1990-91. The innings is the third highest by a skipper against India. England’s Graham Gooch had made 333 at Lord’s in 1990 and Australia’s Michael Clarke had posted 329 at Sydney in 2011-12.

# McCullum is the second player to post three double hundreds against India. Ricky Ponting had made two in 2003-04 and one in 2011-12. McCullum became the first New Zealand batsman to register double hundreds in consecutive Tests – 224 at Auckland and 281 not out at Wellington. His first double century was 225 in the 2010-11 Ahmedabad Test.

# McCullum has become the second batsman to register double hundreds in consecutive Tests vs India. Ricky Ponting had posted 242 at Adelaide and 257 at Melbourne, both in December 2003.

# McCullum’s aggregate is the second highest by a New Zealand skipper in a Test series behind the 546 (ave.60.66) in the five-Test series by John Reid vs South Africa in 1961-62.

# His aggregate is a record by a captain in a two-Test series.

# In Test annals, six times a player has totaled 500 runs or more in a two-Test series.

# McCullum, during his career-best knock, has faced 525 balls, which is the longest in terms of balls faced by a player in a Test innings in New Zealand. Clive Radley (England) had faced 524 balls to post 158 at Auckland in March 1978.

# McCullum, in all, has batted approximately 727 minutes, which is the longest by a New Zealand batsman, surpassing the 704 minutes taken by Glenn Turner during his 259 against West Indies at Georgetown in April 1972. McCullum’s innings is the longest taken by a batsman in terms of minutes in New Zealand, eclipsing Shoaib Mohammad’s 720-minute innings to record 163 vs New Zealand at Wellington in February 1989.

# McCullum and Watling put on 352 — New Zealand’s first triple century partnership for any wicket against India in Tests. The Partnership is a record for the sixth wicket in Tests, bettering the 351 between Mahela Jayawardene and Prasanna Jayawardene for Sri Lanka against India at Ahmedabad in 2009-10.

# Four partnerships of 300 or more have been registered for New Zealand in Tests — the highest being 467 for the third wicket between Martin Crowe and Andrew Jones against Sri Lanka at Wellington in 1990-91.

# The 352-run partnership is the fourth highest for any wicket against India in Tests — the highest is 576 for the second wicket between Jayasuriya and Roshan Mahanama for Sri Lanka at Colombo, RPS in 1997. 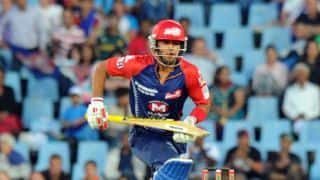