Bay Oval could offer a different template, so India will be wary of a backlash.

After putting up scores in excess of 300 in three straight ODIs against Sri Lanka this month, New Zealand were dealt a blow in the series opener against India and now face a stiff challenge to push the second-ranked team in the second match at Mount Maunganui’s Bay Oval.

Returning to the venue at which they recently piled up 371 and 319 could act as some sort of inspiration for New Zealand, but for a change in results they will have to bat exceedingly well against one of the most potent bowling attacks in the game. Kane Williamson  has called for a smarter batting display from his team after they were beaten by nine wickets in the opening ODI. Having opted to bat, Williamson top-scored with 64 out of a sorry total of 157 in 38 overs as Mohammed Shami, Kuldeep Yadav and Yuzvendra Chahal combined to confuse the hosts. That the Blackcaps managed middle-order alliances of 34, 24, 31 and 26 speaks of the way India dominated.

In three days, New Zealand won’t have to worry about Virat Kohli but there are still two innings to try and contain him.

India’s bowlers will be on a high after an exemplary display in Napier, and in particular the new-ball burst from Shami was a big plus. Getting such efforts from Shami, Bhuvneshwar and the wrist-spinners will all shape India into a tougher side with the 2019 ICC Cricket World Cup on the horizon, but equally these matches in New Zealand are critical for the middle order. (ALSO READ: Run-filled Bay Oval not a concern for India, insists Shikhar Dhawan)

Bay Oval with its run-filled reputation could offer a different template after a surprisingly slow Napier track, so India will be wary of a backlash.

Weather: Partly cloudy with a high of 24 degrees

The hosts dropped the legspinner Ish Sodhi for the last game, while India added a second wrist-spinner. Sodhi could slot back at the expense of Doug Bracewell, unless New Zealand opt for Colin de Grandhomme to bolster the lower-order batting.

It may not be a bad idea to push Tom Latham up to open with Martin Guptill, but the management appears to have faith in Colin Munro.

Hardik Pandya has been allowed to return to cricket, but as he has not landed in New Zealand he is out of the reckoning. India are unlikely to make any changes.

– New Zealand have three of six ODIs at Bay Oval. India have not played here.

– Seven ODIs at Bay Oval have produced a 3694 runs. The last two ODIs played there this month resulted in over 1300 runs.

“I feel I’m an experienced player now. I came here few years back as well. With experience, you take things with ease and you know what to do and what not to do. I back my technique and instincts more now.” – Shikhar Dhawan

“I think they did perhaps expose us in some areas – I think the length they bowled was outstanding, it did make scoring hard to achieve.” – Williamson Experience, not adjustment, behind Dhawan’s quick grasp of conditions 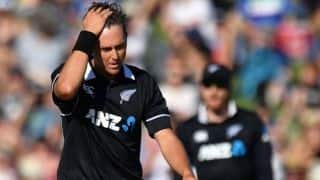