Rohit Sharma scored 62 and Virat Kohli signed off his tour with 60.

Shami and Pandya shared five wickets, Rohit made 62 and Kohli, in his final innings of the tour, got 60 before Ambati Rayudu and Dinesh Karthik finished the game with a partnership of 77 in 11.5 overs. A seven-wicket chase with seven overs left in the game was another apt reminder of the chasm between the qualify of both teams this series.

It was a familiar template. New Zealand’s top order fell inside the Powerplay to India’s new-ball pair, increasingly sharp with each passing match they play together. Kane Williamson got a start and threw it away. The only difference from the last two games was that New Zealand allowed the wrist-spin pair of Yuzvendra Chahal and Kuldeep Yadav two wickets in 17 overs. Key to that last chapter was a partnership of 119 in 21.1 overs between Ross Taylor and Tom Latham, who hit fifties to give the Blackcaps something to bowl at. (AS IT HAPPENED: INDIA vs NEW ZEALAND, 3rd ODI)

Williamson won his second toss of the series and opted to bat, but like the openers before him, failed to make it count. Colin Munro was dropped seventh ball by a diving Karthik, edged his eighth wide of slip and was out next ball when he poked Shami to second slip. Martin Guptill whipped Bhuvneshwar Kumar over midwicket for six and drove over mid-on for four in one over, only to steer him to Karthik in the bowler’s next over.  After 6.1 overs, New Zealand had lost their openers with 26 on the board. (FULL SCORECARD: INDIA vs NEW ZEALAND)

Williamson looked good for his 28, before a meaty flick off Chahal was superbly intercepted by a diving Pandya at midwicket. Taylor struggled to negotiate Pandya – playing his first international match since September – and Chahal in a tidy period which yielded 1/28 in ten overs. Taylor’s first 36 balls produced 15 runs, he then moved to 24 off 51 before striking two fours off Pandya in a new spell to find some momentum. He also survived an lbw review off Pandya, with the umpire’s call standing. Two fours off Kedar Jadhav gave Taylor his fifty off 71 deliveries.

Latham hit one four in his first 54 balls but in that time scored 40 with some good running. His first six came in the 36th over when he swung Chahal over square leg. No sooner had he raised his half-century, Latham attempted a second six off Chahal and toe-edged the shot to deep midwicket.

Pandya returned for a final spell and had Henry Nicholls gloving a slower bouncer to Karthik, keeping wickets in place of the stiff MS Dhoni, for his first international wicket since August and then Mitchell Santner edging a cut. Shami returned to get Taylor edging to Karthik for 93 off 106 balls, a failed attempt to run the ball to third man giving the replacement wicketkeeper his third catch and in the same over had Ish Sodhi caught at long-on. Kohli ran out Doug Bracewell and Trent Boult top-edged Bhuvneshwar with a wild slog. (READ MORE: On ODI comeback, Hardik Pandya underlines bowling value)

Chasing 244, India lost Shikhar Dhawan for 28 in the ninth over but hardly broke a sweat in their chase. Rohit and Kohli kept the same tempo by running well and perforating the gaps with ease. Rohit began with a flicked four off Bracewell, whose first three overs cost 27 and broke a boundary-less streak by lofting Santner for six. There were also flat-batted pulls through midwicket, steers to third man and a big six off Lockier Ferguson that landed in the grass banks behind deep square leg. Attempting a third six, Rohit lost balance and was stumped off Santner.

Kohli harried  between the wickets, nudged and deflected and ensured that no bowler got to him. Santner was swept – a shot Kohli doesn’t play often – over square leg, Sodhi was pulled and steered for fours and Ferguson delicately guided to third man. A lovely jump at extra cover from Nicholls ended his innings on 60, which was to be the last stroke of fortune for New Zealand.

Karthik sent his ninth ball skimming over mid-off for four and pulled anything fractionally short while Rayudu continued his busy tour alongside the new man in, the pair staying busy between the wickets. Karthik finished 38 off 38 balls, Rayudu 40 off 42. That the match ended with an errant bouncer from Bracewell that flew over the wicketkeeper’s head for five wides further underlined New Zealand’s awkwardness in the series. 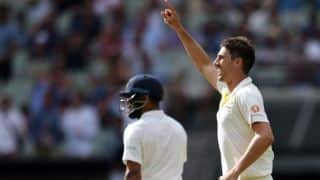 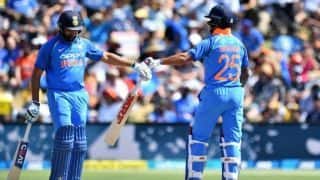