New Zealand skipper Kane Williamson won the toss and chose to bat, which is the way Virat Kohli would have gone had the coin landed in his favour as the third ODI got underway at Mount Maunganui.

Kohli said he didn’t mind chasing, and with Hardik Pandya back in the side India have a solid big-hitting option. MS Dhoni has a stiff hamstring and is rested, with Dinesh Karthik taking over the wicketkeeping duties.

Vijay Shankar made way for Pandya, who last played for India in September.

New Zealand dropped Colin de Grandhomme and brought back Mitchell Santner. The hosts trail 0-2, meaning this ODI is a must-win. 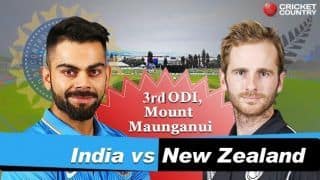