With Virat Kohli rested, India could hand a debut to young Shubman Gill.

Second-ranked India are on the hunt for a series whitewash, even with Virat Kohli having left New Zealand, while the hosts are hoping to save face and resurrect their fortunes in the countdown to the 2019 ICC Cricket World Cup this summer when the teams meet in the fourth ODI at Hamilton’s Seddon Park on Thursday.

With the five-match series already lost after three ODIs, New Zealand are in a situation not many could have envisioned given their resurgence as an ODI force. The reasons for India being up 3-0 is rather straightforward: their pace bowlers have put the pressure on New Zealand with early wickets, whereas the home team’s bowlers have rarely put India’s top order under pressure. Not once have New Zealand put India in a proper spot of bother, with each result identifying the gulf in class.

Beating Sri Lanka 3-0 this month kept the Blackcaps at No 3 in the ICC ODI rankings, but now they face a battle to stop India from moving to within one point of top-ranked England. Not since 2005 have New Zealand lost four consecutive ODIs at home. Even with Kohli gone, it will take something drastic to prevent a fourth loss.

Rohit Sharma will lead India in Kohli’s absence, with the spotlight on the uncapped Shubman Gill, who helped India Under-19s win the junior World Cup a year ago in New Zealand. Could Seddon Park mark his much-awaited India debut?

Where to watch: Star Sports Network/Hotstar or you can follow LIVE ACTION here.

Jimmy Neesham and Todd Astle were added to the Blackcaps’ squad for the fourth and fifth ODIs, replacing Doug Bracewell and Ish Sodhi. Neesham will slot back in after missing the last three games due to injury, and given his fine all-round form against Sri Lanka earlier this month he will add solid depth. Astle, who was sent back from the UAE in September with an injury, should play in Sodhi’s place for his first ODI since January 2013.

With Kohli gone, India have a dilemma in who to bat at No 3. The 19-year-old sensation Gill is in the squad, but is unlikely to travel to the World Cup. India’s reserve batsman at the World Cup will be Dinesh Karthik, so if MS Dhoni is fit to play the fourth ODI then there is a strong case for Karthik to play as a batsman. But will India want to send him at No 3, a spot where he has batted just seven times in 76 ODI innings and definite will not bat during the World Cup.

“We just haven’t been up to it. If we’re brutally honest, with both bat and ball we haven’t been able to penetrate.” – Ross Taylor 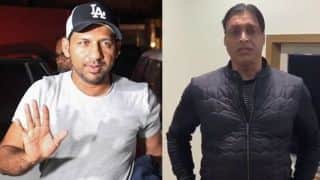 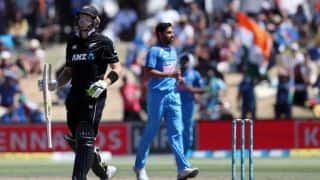