New Zealand have pin-pointed two “obvious” areas where they need to improve for Saturday’s second one-day international against India – batting and bowling. India exposed a huge gulf between the world’s second- and third-ranked sides when they strolled home by eight wickets in the series opener at Napier on Wednesday.

“The competition is always there in our side,” he said Friday on the eve of the second ODI in Mount Maunganui. “Everyone has been performing really well. Our strength (of depth) is very good.”

While India have the nice problem of a surfeit of talent, New Zealand swing bowler Trent Boult noted the home side’s issues in the two key areas. “I think it’s obvious we know where we went wrong,” he said. “We were severely outplayed the other day.”

After winning the toss and electing to bat, New Zealand were rolled for 157 in 38 overs. The match was shortened to 49 overs – and India given the slightly reduced target – after glare from the setting sun forced a delay of more than half an hour. Boult said New Zealand needed to set a good platform at the start of the innings “and obviously put a good target on the board… it’s about batting in partnerships and taking the game deep so we can really cash in in those later overs.”

Mohammed Shami whipped out the New Zealand openers in his first two overs but Boult and new ball partner Tim Southee were unable to make a similar breakthrough.

“We know that early wickets in this format kind of kill you,” Boult said, saying New Zealand needed to be aggressive with the new ball. “If we can get three wickets in the first 10 overs, we know what pressure that puts on the rest of the team in the shed. They are human and they do make mistakes.”

New Zealand played Mitchell Santner as their sole spinner in Napier but may add Ish Sodhi to the line-up for game two following the success of India’s spin pair Kuldeep Yadav and Yuzvendra Chahal, who took six wickets between them in the opener of the five-ODI series. 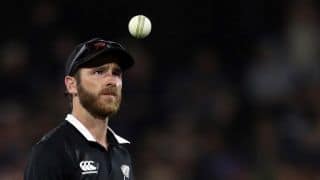 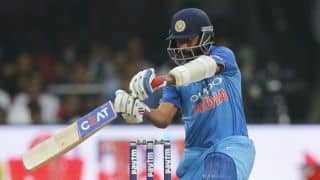