Williamson, who top scored with 64 in the series opener, edged one back onto the stumps off Mohammed Shami and fell for 20 in the second ODI.

For No. 3-ranked New Zealand, back-to-back losses at home is a worrying sign. While the bowlers did well to restrict the Indian batsman to 324 at the Bay Oval in Mount Maunganui a target both captains believed was a par score the home batsman offered very little resistance, save Doug Bracewell, who top scored with 57, as the Black Caps were shot down for 234 in 40.2 overs to hand India a dominating 90-run to go 2-0 up in the five-match ODI series. (India vs New Zealand, 2nd ODI: FULL SCORECARD)

Little frustrating, not so much the loss but how we are losing is the problem, New Zealand captain Kane Williamson said at the post-match presentation on Saturday.

Credit to India. Both surfaces so far have been slower than usual but still fair surfaces. Good signs with the ball at some points though we never got control as such. 324 was a good score that could be chased down here. There were some good steps forward, particularly by our bowlers to keep them down to 320-odd. (ALSO READ: Back-to-back clinical performances is really pleasing: Virat Kohli)

New Zealand now face an uphill task to win three matches in a row to salvage their prospects of winning the series. Both sides face each other at the same venue on January 28.

Important not to carried away by results and focus just on small steps. Some of the dismissals were a result of us going too hard maybe. If we had wickets in hand, you never know but we didn’t have wickets in hand. Those are the lessons that we need to take ahead, Williamson, who top scored with 64 in the series opener, edged one back onto the stumps off Mohammed Shami and fell for 20 in the second ODI, said. 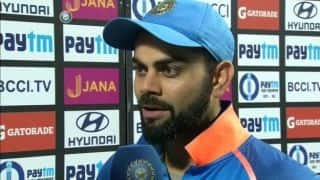