India are at 64 for three after 27 overs in their second innings against New Zealand.

Cheteshwar Pujara has been dismissed by Tim Southee for 17 on Day Five of the second Test against New Zealand. India are at 64 for three after 27 overs chasing 435 runs to win. Virat Kohli is batting on 36 and Rohit Sharma is on one.

Southee bowled a back of a length delivery and Pujara tried to flick it towards fine-leg. But he only edged it to BJ Watling behind the wickets. Shikhar Dhawan and Murali were the other wickets to fall in the run-chase so far. 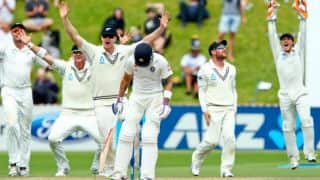