The only change in India's Playing XI, as revealed by Rohit, was the inclusion of Kuldeep Yadav - yet to play in the series - ahead of Yuzvendra Chahal.

In the final match of their tour of New Zealand, India opted to field after captain Rohit Sharma won the toss at Seddon Park in Hamilton on Sunday. The only change in India’s Playing XI, as revealed by Rohit, was the inclusion of Kuldeep Yadav – yet to play in the series – ahead of Yuzvendra Chahal.

The last time India played at this venue – the 4th ODI – they were bundled out for 92, a reason Rohit explained to be the decision behind chasing.

“We are looking to bowl first. It’s a good pitch,” Rohit said. “We didn’t have a great result the last time we played here. It’s a big game. The combination allows us to chase as we bat deep. We have a good record chasing. It’s been a long summer for us, we are all are professionals and we have a job to do. We have made one change, Kuldeep comes in place of Chahal.”

Kane Williamson, the New Zealand skipper revealed that he too would have liked to bowl first.

“We would have had a bowl. Looks like a good surface. It’s important to the job up front. In T20 cricket, to take wickets is really important. We have to assess conditions. Fantastic performance in the first game, not quite there in the second. That is very important in T20 cricket. Tickner comes in, he makes his debut, a well deserved opportunity,” Williamson said. 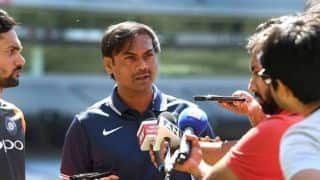