Bhuvneshwar Kumar ended Day 2 of the second Test with figures of 5 for 33.

Kolkata: Indian pacer Bhuvneshwar Kumar said Ross Taylor‘s wicket was the one he cherished the most among the five he took on Saturday. “Ross Taylor’s wicket pleased me the most,” Bhuvneshwar said after the end of the day’s play at the Eden Gardens here. The 26-year-old Uttar Pradesh pacer returned figures of 5 for 33, cleaving through New Zealand’s batting and propelling India to an advantageous position on Day Two of the second Test. Drafted into the side in place of Umesh Yadav keeping in mind the grass on the Eden pitch, Bhuvneshwar grabbed the opportunity with both hands.

Asked whether there was any added pressure on him, he said, “There was no extra pressure on me. I am happy with the way I bowled. The pitch had a lot for the bowlers and I exploited that.” Later at the press conference after the end of the day’s play, Indian wicket-keeper Wriddhiman Saha lauded Bhuvneshwar’s efforts. “He bowled beautifully. The wicket assisted bowlers and I thought the way he went about his job was exceptional. Even [Mohammed] Shami, Ash [Ravichandran Ashwin], Jaddu [Ravindra Jadeja] bowled well,” Saha said. Bhuvneshwar was not picked for the first Test at Kanpur. Umesh Yadav was preferred instead of him. After picking up a five-wicket haul in his last appearance at the Caribbean, Bhuvneshwar has once again delivered for India.

India are in commanding position in the second Test at the moment as New Zealand have managed to score just 128 for 7, before bad light stopped play. New Zealand are still 188 runs behind with just three wickets remaining. 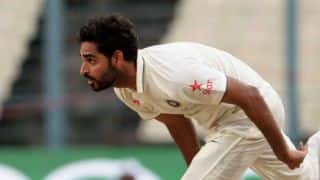