After surviving a series of spin overs from Ravichandran Ashwin and Ravindra Jadeja after the first powerplay, both the batsmen went along comfortably scoring runs in singles and twos and taking the odd chances to loft the ball over for boundaries and sixes.

Taylor was the first to complete his half-century followed by Williamson.

Williamson has looked in sublime form scoring his fourth half-century in as many matches in this series. Looking at the comfort level of the batsmen against the slower bowlers, Dhoni got back Ashwin and Jadeja in to bowl. Lalit Modi’s return will intensify the heat on BCCI 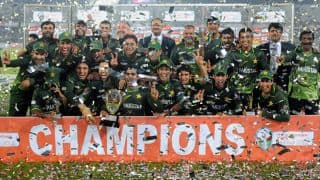