Mohammed Shami has credited Virat Kohli and Indian team management for having faith in him despite him going through a tough phase during which he battled fitness issues, domestic troubles before the England tour resulted in change of fortunes.

Since India’s four-Test tour of England last year, Shami has re-established his place among the first-choice pacers including in ODIs. The upward trend in his bowling graph continues with a man-of-the-match performance in the series opening first ODI against New Zealand which India won by eight wickets on Wednesday.

Shami, who took 3/19 during the rubber, also became the quickest Indian to claim 100 ODI wickets. Speaking after the match, the 28-year-old said the being laid low due to injury has changed his mindset.

“Injuries changed my outlook. I made a comeback after a long time, spent a good time at our world class rehab centre. The management and support staff have been cooperative, as has been my captain who has always encouraged me,” Shami said at the post-match presentation.

Shami said the team comes out with multiple plans which has been the reason for their success. “Till now, whatever we have achieved has been a team effort. We enjoy each other’s success and are able to execute our plans. If we have a plan A that doesn’t work, there’s always a Plan B. As a bowling unit, we decide things together,” he explained.

Talking about the conditions, Shami said, “Pitches were similar to Australia but the grounds there were bigger and climate was warmer, here the venues are smaller with pleasant temperatures. Important to adapt and we’re enjoying it.” 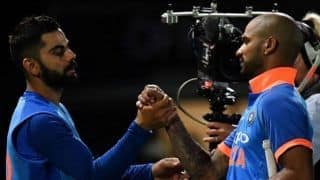