Opener Nasir Jamshed struck his second consecutive century to give Pakistan a solid start but a middle-order collapse saw India bundle out Pakistan for 250 in their must-win second one-dayer at Eden Gardens. 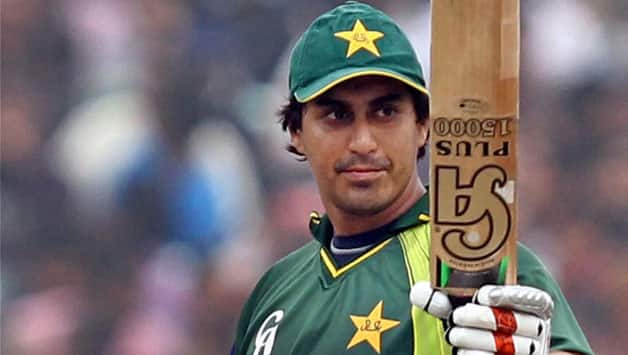 Opener Nasir Jamshed struck his second consecutive century to give Pakistan a solid start but a middle-order collapse saw India bundle out Pakistan for 250 in their must-win second one-dayer at Eden Gardens.

But India made a dramatic comeback riding on left-arm spinner Ravindra Jadeja’s 3 for 41 as Pakistan were bundled out in 48.3 overs.

After giving the first breakthrough, Jadeja took two wickets — Jamshed and Kamran Akmal — in one over to trigger a collapse, as Ishant Sharma (3/34) polished off the tail.

From 141 for no loss, Pakistan lost 10 wickets in 25 overs as India made a spectacular comeback in their must-win match.

Put into bat, in-form Pakistani opening duo of Hafeez and Jamshed were at ease against the Indian pace attack up front and got off to a watchful start.

The inexperienced Indian attack of Ashok Dinda and Bhuvneshwar Kumar could not make use of the overcast conditions like skipper Mahendra Singh Dhoni would have expected after winning the toss.

On the other hand, it was intelligent cricket on display from the opening duo as they cleverly bisected the field to steal a boundary almost every over in the first Power Play to go almost six an over.

In his ‘home’ debut, Dinda was wayward with his bouncers, conceding three wides — two in his second over — while Bhuvneshwar too lacked the bite as the Pakistani duo went scotfree.

Against an ordinary Indian fielding that saw the ball flying past the fielders, it just made the ask easier for the Pakistani opening duo.

The 23-year-old Jamshed continued from where he had left in Chennai, while Hafeez made up for his duck with a sensible batting display and rotating the strike.

The duo never panicked and such clinical was their approach that they put on 100 runs in exactly 100 balls — incidentally, Pakistan’s first century stand by any opening pair at the Eden.

Hafeez completed his 15th half-century from 50 balls with a single to deep square leg.

The New rules — that stipulate five players inside the 30-yard circle for full 50 overs — added to India’s misery as Pakistani batsmen were not deprived of the boundaries.

Azhar Ali (2) continued his poor run when he was run out after being sent back by Jamshed from the striking end as Pakistan lost their second wicket in four runs.

They quickly lost a third, when Younis Khan (10) was unlucky to be adjudged leg before despite a bat-pad as the Indians managed to arrest the free flowing Pakistani run-rate.

Jamshed, however, kept his cool in his elegant innings to bring up his second consecutive century, third overall, all against India.

Jamshed clobbered Jadeja over his head for a straight overboundary to move to 96 and retained the strike taking a single on the last ball with a cool-headed demeanour.

The left-hander straight drove one uppishly in the midoff boundary region to bring up yet another century against India.

But he could not carry his innings through as he became Jadeja’s second victim.

Jadeja claimed Kamran Akmal (0), his third, in the same over to bring in the Pakistani middle order collapse.