According to reports in the Indian media, the much-anticipated bilateral cricket series between India and Pakistan has not got the approval of the Indian government. The series had hit a roadblock after making its way through the offices of the Board of Control for Cricket in India (BCCI) and Pakistan Cricket Board (PCB), and it was also okayed by the Pakistani government. But media reports on Friday morning informed that the series has not got the necessary approval from the Indian government. The Indian and Pakistani cricket teams were expected to play a three-match One-Day International (ODI) and two-match Twenty20 International (T20I) series in Sri Lanka, a neutral venue. The BCCI had said that it will not allow its team to play in the UAE, where Pakistan was slated to host India after they had signed a MoU last year. ALSO READ: Sports minister supports BCCI’s decision to play series against Pakistan in Sri Lanka

Pakistan was supposed to be the host for a series this time around, as India had hosted their arch rivals in 2012-13 for limited-overs clash. BCCI president Shashank Manohar had categorically said that he would never allow the Indian cricket team to play in the UAE, because of the suspicious activities which may occur in the country. ALSO READ: PCB still awaiting communication from BCCI on proposed Indo-Pak series

The meeting between Manohar and his PCB counterpart, Shahryar Khan saw the series being shifted to Sri Lanka, as PCB and the Sri Lanka Cricket (SLC) share the same TV broadcaster in Ten Sports, which would have ensured that Pakistan at least does not suffer financial loses.

Pakistan coach Waqar Younis had expressed his thoughts on the series, as quoted by PTI, “I think Pakistan and India need to play more against each other. As far as performances is concerned India is also doing well in Test cricket like we have done but they have also struggled like us in the limited over matches,” he noted. “So it would be an interesting series for both teams. But we are prepared to play whenever the Boards give the go-ahead,” he said. 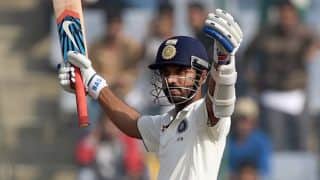