Cricket helps to bridge the gap between two worn-torn nations India and Pakistan. One of the shimmering examples of this was witnessed when Sudhir Kumar Chaudhary (the big fan of the Indian cricket team and Sachin Tendulkar) and Mohammad Basheer Bozai, an ardent Pakistani fan came together and shared some light moments. Bozai painted the head of Sudhir and also sung a song later on. He painted the tricolour as Sudhir was seated. In a video released by ABP Live, Bozai can be seen painting Sudhir’s head and then dancing joyfully. He sings the first two lines of the song ‘O mere dil ke chain’ from the movie ‘Mere Jeevan Sathi’. It is a famous song by the everlasting singer Kishore Kumar. Later Sudhir joins in the singing. Live Cricket Scorecard, India vs Pakistan, Asia Cup 2016 4th Match at Mirpur,Dhaka

Both Sudhir and Bozai are big fans of their respective teams and attend most of the matches in which their sides participate. Sudhir, being a hardcore fan of Tendulkar was deeply saddened when the maestro retired a few years earlier. Pakistan has some big cricket fans besides Bozai. One of them is Chacha Cricket. Chacha cheers for his team Pakistan with equal vigour. In 2012, Chacha Cricket had said that he was the number one cheerleader for Pakistan, As I have said before, whatever I do, I do it for the people of my country, and to make other people happy as well regardless of where they come from. Behind all this is my love for my nation. I am considered as the number one cheerleader for Pakistan all around the world that is why I really work hard to keep my enthusiasm and in every match I come with new ideas and new slogans,

(With inputs for PakPassion.net)

"Don't listen to them. It's not a war," says Joy Bhattachrjya 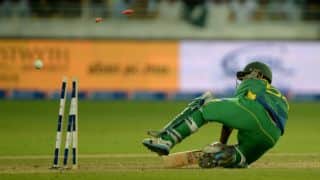