South-Asian giants and defending champions, India will take on their fierce rivals, Pakistan in their opening encounter of the ICC Cricket World Cup 2015 at the Adelaide oval in Adelaide. This will be the sixth clash between the two teams in the mega event with India leading 5-0. India vs Pakistan Live Score

A lot of the talk has been about India’s clean slate against Pakistan in World Cups. When Indian skipper MS Dhoni was asked about that, he said that he doesn’t believe in statistics and jovially said, “The only thing that matters is you have to answer a lot of questions regarding that.” LIVE UPDATES: India vs Pakistan ICC Cricket World Cup 2015

On the other hand, Misbah-ul-Haq, the Pakistan skipper, said: “Obviously, India-Pakistan is always all about pressure. The best thing we can do is just enjoy the game, enjoy the atmosphere, go there, play your game, be positive, and that’s the way how it is. I think if you could just go there and play your natural game: that’s how you can handle the pressure well; and that’s my advice to the team.” ICC Cricket World Cup 2015: POINTS TABLE

Live streaming has taken the world by a storm in a world which is growing smaller with each passing day. Gone are the days when one would have listen to commentary on the radio, or read the match report on the following day’s newspaper, if one did not have the luxury of a television. One can watch the match live, if one can afford to shell out some cash for a compatible device. Many websites also offer the additional support of live ball-by-ball commentary in text form, which is available on our website.

While the facility has enabled us to stay updated wherever we may be, one must ensure that the website they are heading to is the right one, as most websites that ‘claim’ to broadcast the match live end up taking the user for a spin, directing him/her to sites that could harm their devices. One must therefore be careful on this front.

Catch the live score card of the India vs Pakistan, Pool B match here 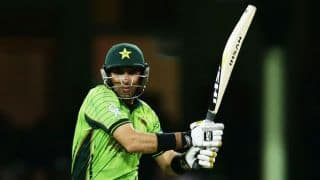