The live telecast of India U-19 vs Bangladesh U-19 match will be available on Star Sports 1 and Star Sport 1 HD.

India have dominated their way to semi-final defeating every opponent till now, whereas Pakistan lost to Afghanistan in their first match of group stage. India are certainly the favourites here having won all their matches and have also defeated Pakistan 12 out of 21 times.

India defeated Bangladesh in quarter-final,whereas Pakistan beat South Africa to qualify in the semi-final. The winner of this match will meet Australia in the final on February 3 at Bay Oval, Mount Maunganui.

It would be interesting to see if Indian continue their winning streak or will Pakistan turn things around and face Australia in final. In the first semi-final Australia defeated Afghanistan by six wickets. India have defeated Australia by 100 runs in the first group stage match. 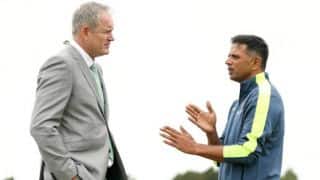 Our preparation and planning doesn't change at all, says Rahul Dravid ahead of Indo-Pak U-19 World Cup semi-final