Sarfaraz Khan‘s all-round show put India on track for a big win against Pakistan in their  ICC Under-19 World Cup 2014 match at Dubai on Saturday.

Zafar Gohar was caught by Sarfaraz off Deepak Hooda for 11, as earlier in the 41st over, he took a simple catch to get rid of Saud Shakeel off the same bowler.
Earlier in the 33rd over Sarfaraz Khan cleaned up Hassan Raza on the third ball of the over and on the fifth, Kamran Ghulam was run out for a duck as Pakistan lost their fifth wicket.

Sami Aslam was run out for 64 in the 26th over as India fought back with quick wickets. Hassan Raza hit towards the off side on the third ball of the 26th over, and Aslam went for a run despite the striker not calling for it. The Indian captain was quick to collect the ball and send it to the non-strikers end. 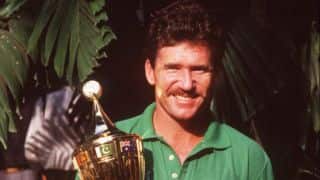