India Under-19 desperate for breakthrough in the clash against Pakistan.

Sami Aslam and Imam-ul-Haq stitched an unbeaten 93-run stand for the first wicket, providing a strong start to Pakistan in their chase of 263 in the ICC Under-19 World Cup 2014 match against India at Dubai on Saturday.

Pakistan reached 93 for no loss in 21 overs, and need another runs to win from the remaining 29 overs.

The Indian bowlers provided a strong start, not allowing the opposition batsmen to get away early on, as they were 21 for no loss after seven overs. 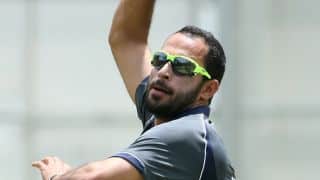