While India want to maintain their clean record, Pakistan are desperate to change it around.

Adelaide: The stage is set for the most talked-about game of the ICC World Cup 2015 — India vs Pakistan — at the Adelaide Oval. Miles away from the cricket-crazy subcontinent, Adelaide Oval is getting its taste of the rivalry as fans of both sides have descended upon city to bring that unique flavour. Valentine’s Day has seen a sea of green and blue, rather than the customary red. Amidst all that, both sides went about their business at training, even as a small bunch of fans hovered around the nets or cheered from the stands.

A lot of the talk has been about India’s clean slate against Pakistan in World Cups. When Indian skipper MS Dhoni was asked about that, he said that he doesn’t believe in statistics and jovially said, “The only thing that matters is you have to answer a lot of questions regarding that.” ICC Cricket World Cup 2015: SCHEDULE & MATCH DETAILS

On the other hand, Misbah-ul-Haq, the Pakistan skipper, said: “Obviously, India-Pakistan is always all about pressure. The best thing we can do is just enjoy the game, enjoy the atmosphere, go there, play your game, be positive, and that’s the way how it is. I think if you could just go there and play your natural game: that’s how you can handle the pressure well; and that’s my advice to the team.” Live Scorecard of the ICC Cricket World Cup Pool B encounter between India and Pakistan

India have a good batting line-up that did not click during the tri-series. They have the core unit in place and one doesn’t expect a lot change. Most of the batsmen had good training sessions. It seems that Ambati Rayudu may sit out with India going with the other six batsmen and an all-rounder at No. 7. For the all-rounder’s spot India would have to decide between Akshar Patel and Ravindra Jadeja. Stuart Binny is also in the race, but India may opt for the spinning all-rounder.

At the press conference, Dhoni said that he feels Jadeja is a better batsman and Akshar will only get better with more exposure. Thus, Jadeja may get the nod ahead of the Gujarat all-rounder. Ravichandran Ashwin should be the leading spinner for India. Then, there is the fast-bowling conundrum. Will Bhuvneshwar Kumar play? That is the big question. He started bowling in practice and Dhoni declared that all his players are fit. Mohammed Shami will be the spearhead. If Bhuvneshwar doesn’t play then either of Umesh Yadav or Mohit Sharma would be in. ICC Cricket World Cup 2015: POINTS TABLE

Pakistan had an injury scare on Friday when Ahmed Shehzad hurt his elbow. However, he is expected to be fit for this clash. With Mohammad Hafeez out, Nasir Jamshed has walked into the side and could be the opening batsman with Shehzad. They also have the option of opening the batting with wicketkeeper-batsman Sarfraz Ahmed. Younis Khan (despite his dismal World Cup record) and Misbah are calming influences in the middle. Then they have the enigmatic Umar Akmal, a match-winner on his day. Sohaib Maqsood and Haris Sohail are other players in contention for a batting slot. And of course, there is the small matter of Shahid Afridi.

The bowling looks crippled in the absence of Junaid Khan, Saeed Ajmal and Hafeez. However, they do have some firepower. Afridi will be the key yet again with his wicket-taking touch. Mohammad Irfan is talked about as a potential weapon given his ability to get awkward bounce thanks to his height. Wahab Riaz’s presence also adds strength to the side. Yasir Shah gives them another spin bowling option, if they need. ICC Cricket World Cup 2015: Complete Coverage

Evidently, there is pressure on both sides. While India want to maintain their clean record, Pakistan are desperate to change it around. The winner is anyone’s guess! Both sides have had tough times in the build-up and the one who holds their nerve could triumph. India’s bowling may be a worry, whereas Pakistan have to ward of the ghosts of history. 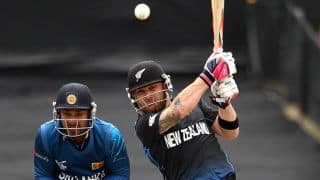