Virbhadra Singh, HP CM said on Thursday that he had never refused to provide security for India vs Pakistan, ICC World T20 2016 match.

Shimla: A day after the India–Pakistan World T20 match was shifted out of Himachal Pradesh due to security reasons, Chief Minister Virbhadra Singh said on Thursday that the state had never refused to provide security for the match. He said the decision to shift the match from Dharamsala to Kolkata was that of the International Cricket Council (ICC). Slamming Board of Control for Cricket in India (BCCI) secretary Anurag Thakur for raking up the issue after the shifting of the match venue, the chief minister said the state had at no point expressed its inability to provide security for the match. FULL CRICKET SCORECARD: India vs Pakistan, ICC World T20 2016, Match 19 at Kolkata

He clarified that the state government had conveyed in this regard even to the union Ministry of Home Affairs. The chief minister said the state had been providing security for such matches in the past and was also doing it for the matches of the ongoing T20 World Cup tournament also. The ICC on Wednesday relocated the India-Pakistan group stage match, to be played on March 19, from Dharamsala to Kolkata citing security reasons. Pakistan cricket team gets govt nod to travel India for ICC T20 World Cup 2016

Virbhadra Singh said it was absolutely outrageous on the part of Thakur, also a BJP MP from the state, to politicise the issue and blame the state government for shifting the venue. He said the state ex-servicemen league, and family members of the martyrs of Kargil War and of the recent Pathankot attack martyrs were opposed to the hosting of the match in Dharamsala. The Congress leader said he had even advised Thakur to approach the family members of the martyrs and the ex-servicemen and seek their support so that the right environment could be created ahead of the match.

He said even senior BJP leaders, including former chief minister Shanta Kumar, who is also an MP, were opposed to the holding of the match and had conveyed his resentment in writing to the prime minister and to him. He said that instead of honouring the sentiments of the locals, Thakur was playing the blame game which showed that money was more important for the Himachal Pradesh Cricket Association (HPCA), which Thakur is heading, than the sentiments of the families of the martyrs. The HPCA’s showpiece stadium, 250 km from state capital Shimla, has a 25,000-seat capacity, besides a world-class indoor stadium comprising video analysis facilities, a club lounge, restaurant, bar and banquet hall. 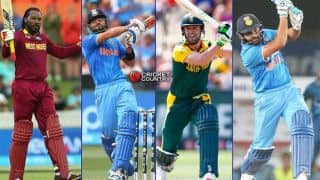